Thanks to the Mammoth Lakes Friends of the Library and a generous grant from the Holmes Foundation, the event will be free to honorary Celts of all ages.

String Theory-Greg Smith, mandolin and guitar, Dan Connor, vocals, guitar and bass and Charlie Broten, fiddle and guitar- are honored to feature Gillian McChesney, whose pure voice will transport you back to the Isle of Green. Gillian, from County Down and Greg from Manchester, England will make peace long enough to play some beautiful ballads and rousing reels and jigs along with some of String Theory’s original tunes.

See you at the Mammoth Lakes Library on Sierra Park Road just South of the High School.

Born and raised in Hawaii, Shihan Tabura began his martial arts training under his cousin’s tutelage in a backyard dojo. Later moving to Southern California, Ted discovered the Okinawa-te dojo headed by another Hawaii-born instructor, Shihan Gordon Diversola. While training at the Okinawa-te dojo, Tabura met John Louis (now deceased) who became his final instructor in Okinawa-te, then Lima Lama. Sensei Louis ranked Tabura as a Black Belt in 1968,

“Fiddlin’ Pete is a violinist version of western-music legend Don Edwards. Along with excellent music and singing, Watercott provided fascinating stories about these western songs’ orgins.” Mark Bedor of Western Horseman, May 2006.

More about Fiddlin Pete at www.fiddlinpete.com.

The Tungsten Peak 11k is a challenging mountain course with awesome views, not a personal best time course! After a 2 mile dirt road warm-up be prepared for 1.1 miles of steep single-track, sometimes very rocky (you will most likely be walking some or most of this section) followed by a short (.25 mile) cross country section on a fairly steep sandy sagebrush slope before reconnecting with dirt roads back to the finish. Plan to be running/hiking for at least 20-30 minutes longer than your typical 10k. There will be one self serve aid station at approximately halfway. Please carry water during the run!

Put your hands up and dance your face off – the party’s coming to Mammoth with Hyper Crush’s latest mix of electro, pop and hip hop beats on March 19! Donny and Holly will rock the vocals while Preston breaks out the keytar and turntables. These three mad geniuses are set on ruling the world with their poppy hits “Ayo” and “Keep Up” but before they do – watch them live in Mammoth at Canyon Lodge.

20 teams of 5 will have the opportunity to compete for an unrestricted 2011/12 Mammoth Season Pass (1 for each person on the team). The school name of the winning team will be engraved on the Mammoth/Fuel TV trophy. All 5 on a team must be from the same school, must have no less than 2 girls per team and must have a day ticket or seasons pass to participate. (The restricted college pass is normally blocked out on Saturdays but will be valid for Saturday, March 19). Swim suits/board shorts recommended.

Most creative bikini will be judged by 2 celebrity pro snowboarders, winner gets an unrestricted 2011/12 Mammoth Seasons Pass.

Most creative carry case or way of carrying your ID and/or season pass while in swim suit will be judged and a special prize will be awarded. This is going to be a good prize – details to be announced!

Playhouse 395
Once Upon a Mattress

For more information and to purchase online
Log on to: www.playhouse395.com

Once Upon a Matress

If you thought you knew the story of “The Princess and the Pea,” you may be in for a walloping surprise! Did you know, for instance, that Princess Winnifred actually swam the moat to reach Prince Dauntless the Drab? Or that Lady Larken’s love for Sir Harry provided a rather compelling reason that she reaches the bridal altar post haste? Or that, in fact, it wasn’t the pea at all that caused the princess a sleepless night? Carried on a wave of wonderful songs, by turns hilarious and raucous, romantic and melodic, this rollicking spin on the familiar classic of royal courtship and comeuppance provides for some side-splitting shenanigans. Chances are you’ll never look at fairy tales quite the same way again. 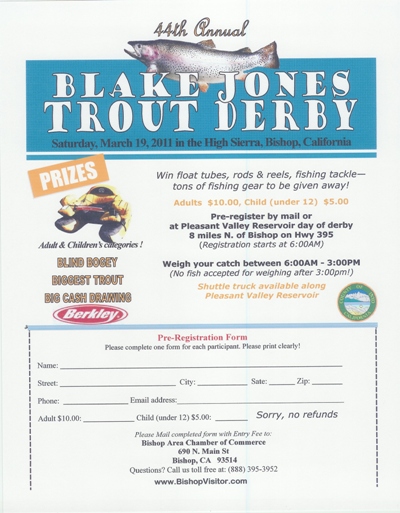 Since 1968, the Blake Jones Trout Derby has been a favorite event in the Eastern Sierra. Nearly $10,000 worth of cash and prizes will be awarded including float tubes, rods & reels, gift certificates and more. The derby is a blind bogey format with categories for adults and kids of all ages.

New this year, we’ll be raffling a 2011 Dave Scadden Skykomish Sunrise ST Pontoon Package. It’s an amazing prize worth $2,000 made possible by the generous sponsorship of Erick Schat’s Bakkery. Tickets are just $5 each or $20 for five. Tickets are available now at the Bishop Chamber and the winner will be announced at the derby.

We work to provide daily news to all of the Eastern Sierra, in the tradition of Eastern Sierra News Service and the Sierra Wave. We bring you daily happenings, local politics, crime, government dealings and fun stuff. Please contact us.
View all posts by News Staff →
Court of appeals denies Bishop Tribal claim against City of Los Angeles
Avalanche Rescue Dog Recertification held at June Mountain