We told you about the little badger, orphaned by a car accident that killed its mother and siblings. Someone brought the young 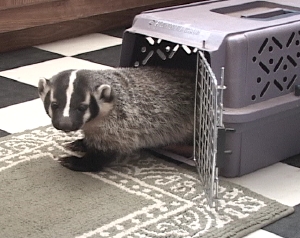 badger to Eastern Sierra Wildlife Care Center. Cindy Kamler and the volunteers have given lots of special attention to the abandoned juvenile.

The badger was not injured in that earlier accident but will need help growing up without a family. Cindy said the badger has been moved outside into an interim pen. Kamler said they hope to provide a better pen later as the badger grows.

The set-up allows the badger to burrow, one of the skills badgers need to know. Kamler said she’s eating well. “Our key thing right now,” said Kamler, “is to keep her from becoming too tame. We go in there twice a day to give her fresh water and food.” The rest of the time, the badger spends alone with a teddy bear.

Kamler has been inquiring around the state for a facility that might also have a badger that the one here could grow up with. No luck so far. “Badger cubs are very rare in the rehab setting,” said Kamler.