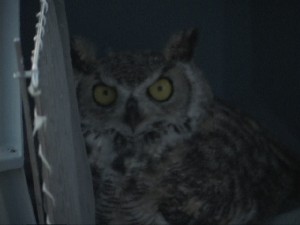 Hoppy the Owl came to the center back in June. Volunteers said he had a deformed right leg and was very young at the time. He may have suffered an accident which caused the deformity.

The volunteers took him through a six month growth period in which he learned to fly, kill and eat prey and develop a style of perching that accommodated his deformed leg.

The happy ending? The center released Hoppy back into the out of doors last Friday during mild conditions when he was fully fed.

We work to provide daily news to all of the Eastern Sierra, in the tradition of Eastern Sierra News Service and the Sierra Wave. We bring you daily happenings, local politics, crime, government dealings and fun stuff. Please contact us.
View all posts by News Staff →
Mammoth Hospital Board appoints former board member
Bureaucrat Beat: Bawling Boehner, Phantom Outage, and Rusty & Arnold