By News Staff on March 31, 2014 in Government Agencies/Utilities 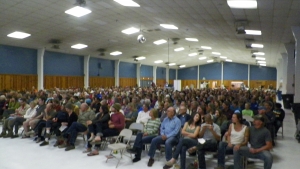 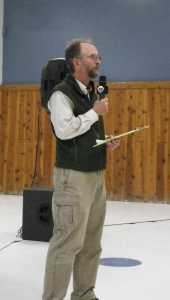 It was over 20 years ago that the Banaff Mountain Film Festival first came to Bishop. This year’s festival, sponsored by the Inyo County for the Arts, was its most successful so far according to event organizers. Approximately 1,400 festivalgoers packed the Charles Brown Auditorium at the Tri-County Fairgrounds.

According to its website, The Banff Centre was founded in 1933 by the University of Alberta, Department of Extension, with a grant from the U.S.-based Carnegie Foundation. Over the years it has continued to add additional arts programs and the Centre became known as The Banff School of Fine Arts in 1935. In 1970, to acknowledge the broader educational role of the school as well as its move toward a center of experiment and innovation, it was renamed The Banff Centre for Continuing Education (The Banff Centre for short).

James Wilson, the former owner of Wilson Eastside Sports in Bishop, along with his friend and outdoor enthusiast Brad Rassler, came up with the idea of having the festival annually in Bishop, and never expected it to develop into the major event that it has become. At Saturday’s showings, Wilson, who has now been involved in 22 of the festivals, was clearly proud of the achievement as he described ticket sales “In the 23 years that I have attended the festival, I have seen it go from a small, intimate group of festival goers to over 600 tickets on Friday night and over 700 on Saturday. It is wonderful.”

While different films were shown on both nights, all of them inspired those attending. Bishop resident and Inyo County District 2 Supervisor Jeff Griffiths commented, “I thought I had seen just about enough films on kayaking, but the film “Cascada,” shown last night /Friday) was exceptional.”

“North Of the Sun (Nordfor Sola)” was the Grand Prize Award winner as well as People’s Choice Award. It told the story of two young Norwegian adventurers as the discovered their own private playground in the Atlantic Ocean and the rocky slopes of a remote, arctic island. Building a cabin out of flotsam while clearing  the beach of debris, they spend the long winter skiing and surfing under conditions that would have most normal people running home at the first sign of a major winter storm.

Many of the short films shown are available free on the Internet or for a small fee. The website Vimeo.com has most of them, including the longer ones. If you see a title of one that you would like to watch online, use your favorite search engine, type the name of the film and the name of the film director, and then press “search.” You will generally find a website listing the video.

If you missed the festival in Bishop, more are scheduled around the state. Visit www.banffcentre.ca/mountainfestival/worldtour/ to find out more.