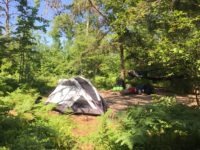 Dispersed camping can be bad for environment

The Eastern Sierra was ill prepared for the waves of Southern Californians literally heading for the hills during last summer’s COVID-19 restrictions and fears. Despite the stay-at-home orders, they escaped to an area assumed to be germ-free and serene, found area campgrounds closed, pitched their tents wherever and left a mess behind them. The excuse for the bad-behavior was a charitable “they didn’t know how to behave.”

So, Mono County Supervisor Bob Gardner held an “Eastern Sierra Dispersed Camping Summit” last week, to figure out a way to prevent the carnage again this year by turning new visitors into responsible stewards of the land.

Paul McFarland with the DeChambeau Creek Foundation led the 51 Zoom attendees through the process, outlining key areas of concentration. Those topics, all staffed with volunteers by the end of the summit, were education, mapping, stewardship, infrastructure and enforcement.

The five groups will come back to the next zoom meeting, March 25, with the results of their brainstorming.

“We’re not here to bemoan the impacts,” he said. “We’re here to focus on our ability to control and change, to work through the challenges.”

He illustrated that challenge with one stark statistic: the sale of RV sales jumped by 47-percent last year. And they all drove up U.S. Highway 395, or so it seemed.

The nature of land management on the Eastside doesn’t help. Los Angeles Department of Water and Power, the Bureau of Land Management and the Forest Service own land in Inyo County, in ascending order. The mix of ownership is a little different in Mono, but no less confusing. And, the areas travelers choose to disperse camp on seem to be focused on Mammoth Lakes, the Alabama Hills and the Buttermilks, according to McFarland—all with their own set of regulations.

A primary spreader of bad information is the web, Instagram and other apps that give people their five minutes of fame. A challenge will be to make good behavior look as much fun as bad behavior.

The following are some of the suggestions from participants.

Yes, agree…it’s time for action. I suggest re-opening all campgrounds and visitor centers for starters. Could it be that closing these places down forced people to disperse camp far more than normal? Asking for a friend.

You’re focusing on the negative. Enforcement doesn’t have to be negative. It can be delivered in an educational form to gain voluntary compliance. Law enforcement folks do this all the time with other issues. Stricter enforcement measures should be reserved for the uncooperative or the repeat offenders. Bottom line though,… Read more »

Dan Chirpich, nice thought but your approach isn’t very proactive, a complete and total pipe dream really. You’re not going to get many people to pick up trash that isn’t already picking up trash. For many, picking up after themselves is too much of an inconvenience, many count on people… Read more »

Why not Close Down INYO County Completely ! Other than Travel back and fourth from Mexico for your House Maids and Gardeners , After all , What is More Important , The Hordes of SoCal Residents looking for a place to spend all of their Money ! Or your Ability… Read more »

Don’t get me wrong, I’m a Braun supporter, but the leash law comment is pretty off point. We literally were dealing with a massive human poop problem last summer. Human poop, trash, and most importantly, fire danger, are what we need the sheriff’s office to address. Obviously the USFS needs… Read more »

Sugarmahs I completely agree with you on all your words, remember there is over 3,000 square miles, 3,000+ in Mono County. USFS does not have the funds to hire 10 to 15 people to do enforcement on FS land in Mono County. We NEED 24 hours of enforcement for dispersed… Read more »

the majority of the dispersed campers stay in a small portion of the forest. We don’t actually need to police the whole 3000 plus acres.

Currently Americans are so limited on recreational activities, that we are in for another massive intrusion this summer. To use taxpayer money to advertise for more tourists during this time where we are inundated, is utterly ridiculous. We are already going to be above our carrying capacity, stop the taxpayer… Read more »

Education is not the end all answer to this disaster. The complete absence of enforcement overrides all other pionts. It boils down to money; specifically payroll. None of the five enforcement agencies has enough people on the payroll to enforce anything. “Closing” campgrounds forced travelers to disperse and payroll sitting… Read more »

Lots of states in the US DONT EVEN ALLOW CAMPFIRES anymore due to drought conditions! I was told from a Forest Service personal, that the tourist want campfires! Well fire restrictions don’t work, never have. Wake up Mono county since we allow campfire we will become another Paradise, California. Not… Read more »

Come on Mono County you give $10,000 plus for COVID relief to 1 restaurant you promote tourism, you can and should provided money for enforcement 24 HOURS of ENFORCEMENT for dispersed camping. If town burns down……..no tourism. No restaurants no anything. Let’s get a dozen people for enforcement. No volunteers,… Read more »

How about banning all campfires and all fire wood sales and inspection to make sure no one has fire wood.

The challenge seems to be getting educational information to our visitors. Too many people won’t take the time to educated themselves unless they know they can face a heavy penalty. Signage up and down much of 395 stating fines so huge that it makes national news and papers, that is… Read more »

25 million people within a days drive

Totally Agree. Billboards with strong messaging. Press Releases from Inyo and Mono County Supervisors to SoCal and National News Sources speaking to the problem and indicating fines, strong penalties, etc. Let them know we’re all watching and will be reporting. Unfortunately, Smokey the Bear and Woodsy the Owl need to… Read more »

Billboards are not the answer, plus they will never happen due to the 395 Scenic Byway designation (thank goodness…they would ruin the viewshed). People don’t read them anyway as they are driving way too fast! As others have stated, enforcement is the key.

Really nice to see Mono getting to ready get trampled on again. Where were our leaders last season?? They live here and just watch it get trampled & trashed all season. Nice for Bob to have this, but I wish more people new about it before hand and actually relevant… Read more »

Mono County has 3,030 square miles, or just over 2 MILLION ACRES. Even if you hire 5 law enforcement people that is NO WHERE near enough to cover all that space for dispersed camping. LETS DO IT RIGHT!,15 to 20 is not hard to ask, and not just 8am to… Read more »

How about signage along 395 saying NO DISPERSED CAMPING

This past summer was a big problem. I saw virtually zero enforcement for illegal camping. And without enforcement there’s little incentive for rogue camper to follow the rules.

Perhaps there would be a way to publish online photo reports of offenders as well as those who excel in leave-no-trace. Nothing like public humiliations and/or rewards/kudos to stir up the pot. Reward peeps who take before and after photos of their sites and post them. Is there any budget… Read more »

“Wilderness Collective” – “Wilderness Makes you Better” – this group of @ 10 dirt-bikers camped illegally in the Buttermilks on USFS land (the pit, at the corner of Starlite Drive and Buttermilk Road), within 1/4 mile of Starlite, with an illegal campfire, Dec 3-5, 2020. Accessed the area through Starlite… Read more »

Those of us who volunteer for the Sierra Trash Eliminators group usually post “before” and “after” photos (on our Facebook page) of the trash/litter we pick up. This is done not so much for shaming purposes, but to encourage others to pick up after themselves in order to leave their… Read more »

Current USFS campground fees are ridiculous. $10 is all I will pay. Since people refuse to take their trash back home with them I feel a location for disperse campers to dispose of trash is necessary and the location well advertised.

We dodged the bullet last Labor Day 2020 with all the dispersed campers in Mono County! I have no idea how a loose campfire didn’t burn Mammoth Lakes or June Lake down late summer. Yes fire restrictions were in place, but campers still had campfires only a mile from town… Read more »

btw, blame the forest service for closing campgrounds without considering the impact

Thank you for the shout-out of the all volunteer Facebook group “Sierra Trash Eliminators” founded by Erica Johnsen. I can’t begin to relay just how much trash/litter myself and my fellow volunteers picked/cleaned up last Spring/Summer/Fall and continue to behind the illegal winter campers. I’m pleased to read about Supervisor… Read more »