It was reported that local artist and man of many talents and achievements, Skandar Reid, died after a sudden illness several days ago and was found dead at his home in Bishop by concerned friends.

It is hard to find the words to describe Skandar in just a few words. He had so many talents, being an artist was just one of them.  Even calling him eclectic doesn’t come close to describing his vivacious, sparkling personality, creativity, enthusiasm, and many talents. In many ways, he was a modern Renaissance Man. He was also a very nice guy…and very generous with his time and talent.

Skandar was a photographer, videographer, a painter, sculpture artist, and a digital artist. He was a writer of children stories. He hiked and climbed. He had a spiritual side. On his Facebook page he referred to himself as a “Vibrational alchemist.” He could be quirky, funny, entertaining, and he was always energetic, which is what makes it hard to process his loss. 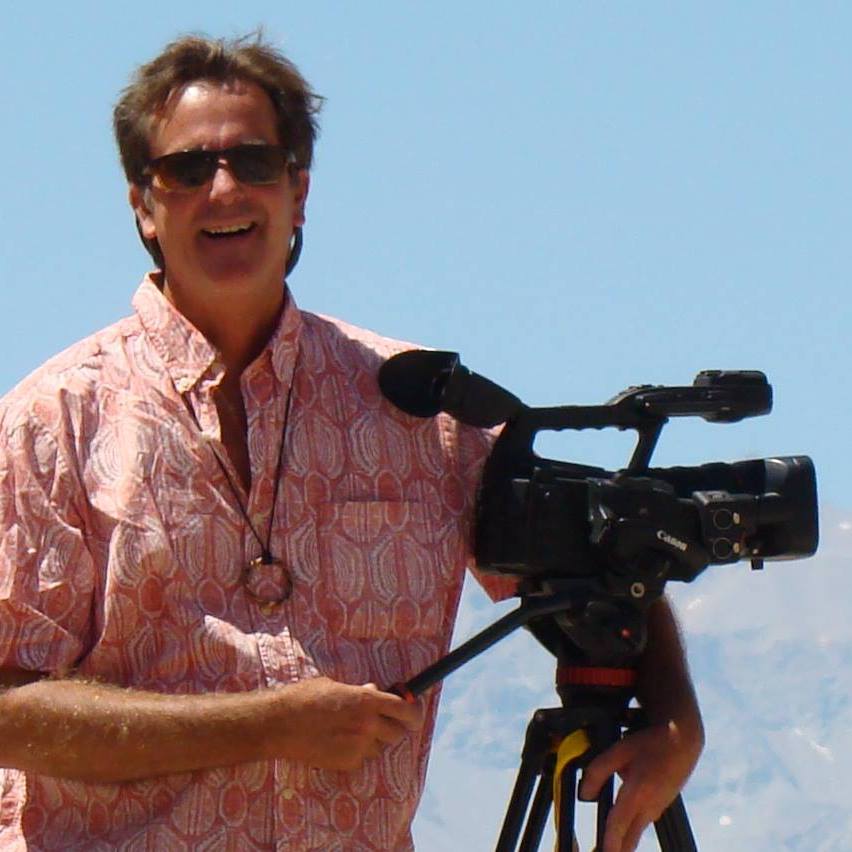 When Sierra Wave first heard of his loss and received confirmation, we began calling a few of his friends for their reaction. It was immediate and devastating as many did not know that Skandar had died. Most simply could not believe it. Even at the Sierra Wave radio station where Skandar had done work with us over the years, all of us are shocked and saddened.

This post is not meant to be an obituary, but an acknowledgment of the great loss felt by many. Frankly, all of us in the local news media have reacted with shock at his loss. It was so completely unexpected. Over the next few days, Sierra Wave will attempt to put together some thoughts of Skandar’s many friends and many accomplishments.

Please join us online at sierrawave.net and share your thoughts and memoires in honor of this great friend to many.

I have know Skandar, Ox, Alex for over 35 years. He was a beautiful human being inside and out. He took my toddler son climbing on rocks many years ago and sent us wonderful homemade postcards from Pakistan, which I treasure. I was able to visit him in Bishop many… Read more »

I met Skandar just this year. We both went to the same high school 30 years apart, and he had created a really cool art installation, a throne carved out of solid stone, as a gift for the school. We got to talking and he shared some of his adventures… Read more »

I met Skandar years ago through family. He was kind, generous, and spiritual. He was so supportive to my family and saved the day at my wedding. I appreciated meeting such a kind soul and I hope he is at peace moving through the cosmos. ??

Skandar is an incredible spirit! I miss him so much! To me he was a healer, an artist, and Mickey and Rosemarie’s adopted son. His generosity knew no bounds. He healed my wolf dog Sarah. He supported me during my darkest hour after losing my father and saved the day… Read more »

I am so glad I got to see Skandar just a couple of weeks ago. I was walking my 3 year old daughter home from preschool, and had stopped to talk with a friend. Suddenly, I heard Skandar’s unmistakable voice asking her, “Do you like animals?” He walked up and… Read more »

This man! Reading the comments makes my heart swell even more. We became close in this life only last year and whilst we only had one physical meeting, the vastness, brilliance and familiarity of his essence are unparalleled. His range is indescribable but touched upon by the comments above. Selfishly,… Read more »

Oh what a loss, I am saddened to hear of the too soon passing of this wonderful soul.

Skandar took us on the best scavenger hunt of all times. He created a video, with a map inlaid into a wooden sculpture that was given to us as the most beautiful gift for Christmas. Alfred the Bear, a marble remnant from his journey to Pakistan was hibernating, wrapped up… Read more »

I only met Skandar a couple years ago in Mt Shasta, but fast and instantaneous friends we became as he held such a gentle yet childlike energy full of imagination, adventure, and humor – I felt like I was in the presence of a cosmic wizard and my inner child… Read more »

Sorry to hear of this news. He was always so helpful to us at SierraSounds. He’s with Jimmy now, doing their shenanigans.

I love this man with my heart and soul. I met him at Wilsons, probably 20 years ago, and since then, we’ve traveled a beautiful journey of friendship together, We shared a similar spiritual outlook on life, and therefore we spent hours on his porch (with a cat or dog… Read more »

Skandar, Alex , was in the fine fine tradition of Inyo eccentrics. Talented and unique he was and will be greatly missed by a great many

I met Skandar when I moved to the Bishop area in 2001. He was indeed a man of many talents and I benefited greatly over the years from his sound vibrational healing work; he was always experimenting with new healing tools and it was fun to see what new ones… Read more »

Dear Alex… I met him as Alex. We became friends at Smoke Blanchards memorial in 1989. Skandar will always remain an icon of sorts. What a unique individual to lose in a small yet very large community. He was a bright, shining presence in this land of Inyo, dwelling place… Read more »

Thank you Charles for the kind words, Skandar was force that has left a mark of beauty on this community. RIP

Skandar brought laughter, lots of laughter, and love, lots of love to the home we shared 20 years ago. He helped to heal my broken spirit, and I helped to heal his. I will always see that time as a gift of growing – forever grateful for that time. He… Read more »

Skandar always said he’d marry our border collie Judydog in their next lifetimes – she had done something very bad and a previous life and they missed out because she had to do time as a dog. She was a very old, knowing, soul and he was sure she’d be… Read more »

I’m shocked and saddened by this, he was a good friend and I supported many of his artistic endeavors and currently own many of his pieces of artwork in my home. I met him at his usual hot spot, Keoughs 20 years ago and we were friends ever since. God… Read more »

Sorry to hear this. I didn’t know him but I have run into him in Bishop on a few occasions over the years. He was always friendly and had a positive energy about him. May he rest in peace.