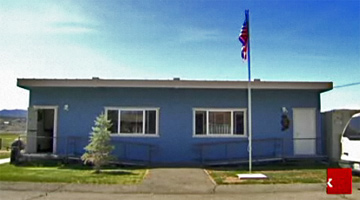 The Eastern Sierra Academy in Bridgeport

The tiny and exclusive school in Bridgeport called the Eastern Sierra Academy has won high honors again. For seven years running, the small academy has ranked in Newsweek magazine’s annual review of U.S. schools.
This year, the Academy came in #132 out of 1500 public high schools. Newsweek produced a video that includes the Bridgeport School – “Five Top Schools in Unlikely Places.” In that video, Academy Principal Roger Yoss makes it clear that they concentrate on college preparatory and technology. Kids who come to the Academy give up sports and athletics. This year, 25 students attend the Academy. The graduating class numbers 7.

Kids come from all over to attend the Academy, and they say they like the small town atmosphere of Bridgeport and the friendly support. Teachers say that two-thirds of the students will be the first in their families to attend college, so the program helps kids that might normally not make it to college.

Teachers say the small size of the school allows kids to take more risks than they would in a bigger institution.

We work to provide daily news to all of the Eastern Sierra, in the tradition of Eastern Sierra News Service and the Sierra Wave. We bring you daily happenings, local politics, crime, government dealings and fun stuff. Please contact us.
View all posts by News Staff →
Second Hiker Dies in Yosemite
MLPD Chief Schienle takes a stand