Early Thursday morning southern Inyo County was rocked by a moderately strong earthquake. The biggest quake so far, a magnitude 5.0, hit seven miles south of Keeler at 3:01 am.

Lone Pine residents were rocked out of bed this morning. Some described a big shake, followed by rolling. At last word, no damage has been reported, but with numerous aftershocks, geologists are already calling this series of quakes the Coso Swarm. 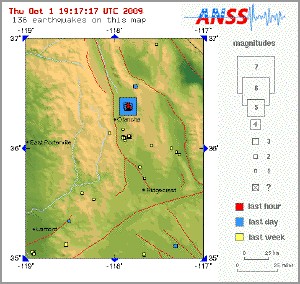 The 1872 Lone Pine quake, said by some geologists to have been stronger than the 1906 San Francisco Quake, is never far from peoples minds when a quake strikes the Eastern Sierra.

When the big one will hit, of course is anyones guess, but Page says that geologists have noted that there has been a global uptick in large earthquakes since 2004, the year of the magnitude 9.4 that caused the devastating South Asia Tsunamis. Periods of few large earthquakes are followed by periods of many large quakes, Page explained. She says that geologists call this the Joseph effect, after the biblical character and the story of feast and famine.

There have been two large earthquakes across the Pacific in recent days, but Page explained that while there is a concept of long distance triggering, where one large quake can cause another, the probability of that being true in this Coso Swarm, is extremely low. The more likely explanation would be normal shaking in a geologically active area such as the place we call home herein the Eastern Sierra.