By News Staff on April 16, 2014 in Government Agencies/Utilities

When Los Angeles Department of Water and Power official, MichaelWebster, travelled to Independence to explain the City’s Solar Ranch project, he heard some angry and some frank comments against LADWP’s plans. The LA Times quoted Supervisor Jeff Griffiths as saying that the skills of the opposition are “unprecedented” and may be a rebirth of “historic empowerment in terms of the County’s relationship with the City of Los Angeles.” 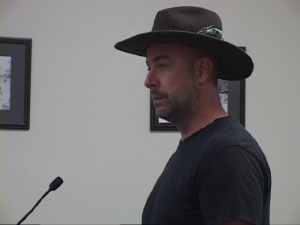 For several weeks, citizens have packed the Board room with overflow in the lobby. The same was true on Tuesday when citizens passionately made their points. Ben Holgate of Independence stood up first and with a loud and angry voice said he was “disappointed in the sales job” he felt Webster had given the people. He criticized DWP for euphemistically calling their mega-solar project a “Ranch” and warned Webster not to go down the path of more resource extraction. Holgate firmly kept speaking even after the timer bell rang. Supervisor Chair Rick Pucci tried to stop him. He left only when he was done.

Jane McDonald told Webster she hoped he understood that the Solar Ranch would fundamentally change the relationship between LA and Inyo. She said we’ve had a trade-off. LA takes the water and Inyo gets undeveloped open spaces. McDonald said the large-scale solar project is a “betrayal of that relationship. You’re crossing a line in the sand,” she said. “All of us are standing together against this project.” She compared the paltry ten jobs DWP has offered to “thousands of jobs in the tourist industry.” McDonald raised curiosity when she said “people are meeting with powerful officials in LA.”

Tom Budlong from southern California said he remains suspicious that environmental documents do not spell out restoration of the solar site when it’s done and lacks mitigation plans for air quality and other impacts.

Citizens tended to direct their comments to Mr. Webster who was sitting in the audience behind them even though County Counsel Marge Kemp-Williams asked 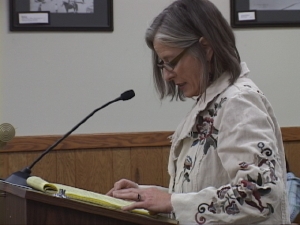 them to speak to the Board of Supervisors.

Eileen Anderson of the Center for Biological Diversity pointed to a new study on bird mortality and solar sites. Ann Capadanno of Independence pointed to the Scenic By-Way designation and the major bird migration path. She said, “I shutter to think of the damage.” Ilene Mandelbaum of Lee Vining said when LADWP realized they had to protect the public trust of Mono Lake, they found other water through conservation and reclamation. She called for aggressive power conservation to reduce demand.

Andy Selters pointed to the fear that DWP’s solar project would only be the first of many. Nancy Masters said the Owens Valley Committee is opposed to the

project because it conflicts with the Long Term Water Agreement and the Lower Owens River Project. She raised the specter of conservation easements on LA land in the Owens Valley which would halt any development. She called for a “re-visit to this idea.” Fifteen people spoke. All against DWP’s plan.

It seems as though the same people who where willing to sacrifice tourism to save a little frog are now the ones claiming to care about tourism in regards to the solar project….Tourism will not be affected whatsoever. If anybody is naive enough to think any tourist would decide not… Read more »

Not sure where the disinformation of the solar ranch having tailings from reward mine spread out on it is comin from. The reward mine is big, bigenough to drive a 4×4 truck all the way to the back of it, but the mine and the tailings are above the valley… Read more »

salblaster: Must be partly my fault. I read the “tailing” issue somewhere. But the real problem is that a site map for the Solar Ranch hasn’t been published — to my knowledge — nobody really knows where it will be or what it will look like except that it will… Read more »

DWP did issue a Fact Sheet with a map of the solar project. If you want it, I’ll email it to you.
BK

Yes, please do email it to me. You might want to publish it also so we could all be on the same page — so to speak.

I am afraid that if I continue here I will alienate myself from many people in the community.
I don’t want that.

The county is wasting time and energy on public meetings with LADWP. LA is a charter city. Under Article 11 of the California Constitution, they are exempt from any law Inyo or Mono county passes, and from state laws unless a municipal ordinance of a charter city conflicts with a… Read more »

It is true that DWP must mostly be dealt with in court, but in this case SoCal politics have come in to play a role. We don’t know the extent of it, but LADWP might have to contend with some of their own local politics reacting to the outcry here.… Read more »

The composition of the LA City Council changes regularly, as do mayors. They can change their policies in response to changes in their physical and political environment. If Lake Meade falls below a level that will allow power generation, as is predicted, LA will lose a major source of electrical… Read more »

As usual, you are right and I am wrong.
BK

Bureau of Reclamation owns Hoover Dam and the power plants there. DWP operated the plants until 1987. Hoover supplies about 6% of LA’s power. They could offset that with just changing out lightbulbs. Hoover power is not counted as renewable as far as state or city goals. If public support… Read more »

If due process and discussion is a waste of time then we on this blog are all guilty of killing time; some more than others.

I am very proud to be a part of this community where the land and the people are so firmly connected; this does not happen in our urban centers. I believe part of the problem is this; the Inyo reveals itself to us slowly. To a visitor Inyo is beautiful,… Read more »

Who are you kidding Mongo? By your own admission you live in LA.

DT, I own a house in Independence. By your standard, I am more qualified than you who by your own admission lives in Ridgecrest. I love the Owens Valley and kid no one. Why must you continually marginalize and demean me simply because you don’t like my point of view?… Read more »

Mongo: You are fighting ghosts and imaginary monsters under the bed. There are NO PV installations and yet you are now worried about 100 Solar Ranches being built/ That would be 400,000 MegaWatts of power. There simply is no way to get that much electricity out of the Owens Valley… Read more »

It won’t be irrational if the transmission line from Nevada comes through the Owens Valley as has been reported.
BK

Benett: I’d like to know more about that transmission line from Nevada. Did you do a story about it that I missed? But if the people of Inyo County don’t want to give up 1200 acres of wasteland, why would they allow a massive transmission line to be built. That… Read more »

No, I did not do a story on it, but heard a comment by an official. Will see if I can get more. I did hear it’s not a done deal but something in the works.
BK

Mongo: “The short growing season results in limited plant productivity in a given year. As a result of thin soil and sparse and delicate vegetation, recovery from disturbance is very slow, estimated to be more than 100 years; thus, this is an area demanding diligent preservation.” Does that mean Inyo… Read more »

I think using existing dirt roads on the valley floor and into the back country is good for tourism and local enjoyment. The impact to vegetation is negligible because the roads are existing. Also, access to natural areas is very important; we need to be able to get there to… Read more »

Mongo: Before the roads were scraped out of the desert, the earth was the unspoiled nature you describe. Now they aren’t…

I’d like to thank the angry, passionate people of the Owens Valley for doing what they can to assure my dependence on fossil fuels. Our Asian neighbors would like to thank you also because Tourism.

Mongo: 0.125% of the Owens Valley — which is the size of the Solar Ranch — on tailings from the Rewards Mine — which was used as a dump by Manzanar — is not “…sacrifice this scenic area…”. Go look at it. There’s nothing there except rocks and lizards and… Read more »

Ken is right. That piece of land is not even remotely pristine. It is probably one of the better places to site a solar generation project. If it was undisturbed land there might, maybe, be an argument against the project. But on land that has served to hold mine tailings… Read more »

LOL! But Ken, I would like to think the opposition to this type of project is opening up the door to true sustainability, because to continue these out dated “band aids” is just a avenue for the established to have even more power! Literally! True energy dependence happens when it… Read more »

Do you make your own electricity now? Your arguments are just the same mystical musings of a “better World” without any real idea of how to get there. Yes, PV panels are someday going to be outmoded — like the steam engines that built our country. So what? We have… Read more »

Anaya’s description also accurately defines how the OHV community is constantly treated in their efforts to preserve reasonable access to our public lands. Be it wilderness designation or mass road closures, we are basically ignored, other than the token efforts to claim public involvement. Environmentalists push the Forest to whitewash… Read more »

Philip: Here’s a read you might find a connection with. http://aridjournal.com/a-paiute-perspective-owens-valley-water-jenna-cavelle/ There is a widely held belief that Los Angeles went out and “stole” its water from Owens Valley. This viewpoint has produced an entire body of literature and film on the Owens Valley-Los Angeles water war. In nearly every… Read more »

Assurances were made in 2004, during the conservation easement consideration on LADWP lands by Mayor Hahn, that the valley had been well protected by LADWP for 100 years and that it would continue to be so protected. (California Water News, July 26, 2004). In this article Councilman LaBonge stated, “…Los… Read more »