By News Staff on March 29, 2013 in Government Agencies/Utilities 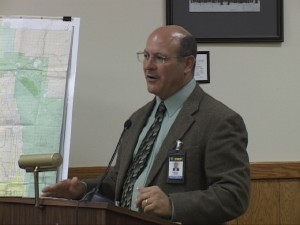 A letter issued this week by the Los Angeles Department of Water and Power looked to some like a new, over-arching strategy by DWP to accomplish its Owens Dry Lake goals. What had been on the back burner now stands front and center – a Master Plan for the Owens Dry Lake but only if dust controls cost less money and use less water.

In his letter, DWP Water Operations Director Martin Adams laid out new details to push ahead with an Owens Lake Master Plan but with some Catch-22s. DWP wants guarantees of less dust control and less water use on the dry lake before spending the money for bird habitats and other items at the lake bed. This new and obvious quid pro quo gives LA a broader goal for opposing parties to consider.

The Master Plan group has no power over dust controls. That’s the exclusive bailiwick of the Air Pollution Control District, State Air Board and State Lands Commission – the parties LADWP is suing to stop their dust control requirements. Although Adams said he’s not “asking the Master Plan group to leverage anybody,” his letter and proposal does repeatedly pit bird habitat against dust control.

Adams made himself available to Sierra Wave Media for questions on his letter. With a relaxed and friendly manner, he said, “If we spend a half million dollars on habitat and recreation at the lake bed, we can’t afford to do that and do dust control.” Adams said, “For us to commit to the Master Plan, we need the ability to use other dust clean-up methods.” Adams said he would like to take “all everyone wants to see and put together a project. If we don’t have to spend another billion dollars on dust controls and can come up with more creative ways to control dust, then we can do the Master Plan project.”

Adams said he is not trying to bypass the Master Plan process that has gone on through meetings with as many as 40 agency and environmental group people over the last two years. His letter says that it may appear LADWP is “abandoning the master planning process or perhaps ‘running off’ with the work of the group. In fact,” he writes, “we are trying to be realistic and deliver a real project in our lifetime.”

Adams talks about transforming the Owens Lake with the use of a “Habitat Suitability Model” already developed by the Master Plan group. Adams said, “We’re pitching an overall solution.” The DWP idea still resorts to divide and conquer, although Adams sees it as the way it is. He said with more water use on the dry lake there has been less water spreading in the Owens Valley for ranchers. With less water down the aqueduct, LA has to buy more state water, he said. As for the Owens Lake dust, Adams said, “We believe we’ve mitigated our impacts.”

Audubon Society official, Andrea Jones, called LADWP’s plan to develop a project proposal that conserves water, saves habitat and uses the Master Plan process a “positive step” that the Audubon Society will review. The DWP letter is posted below: 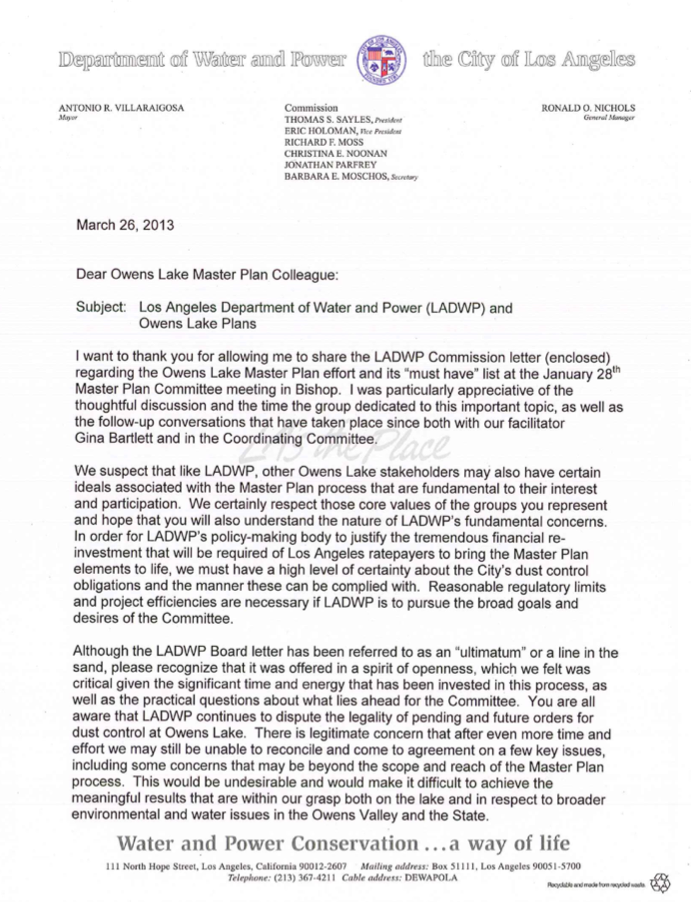 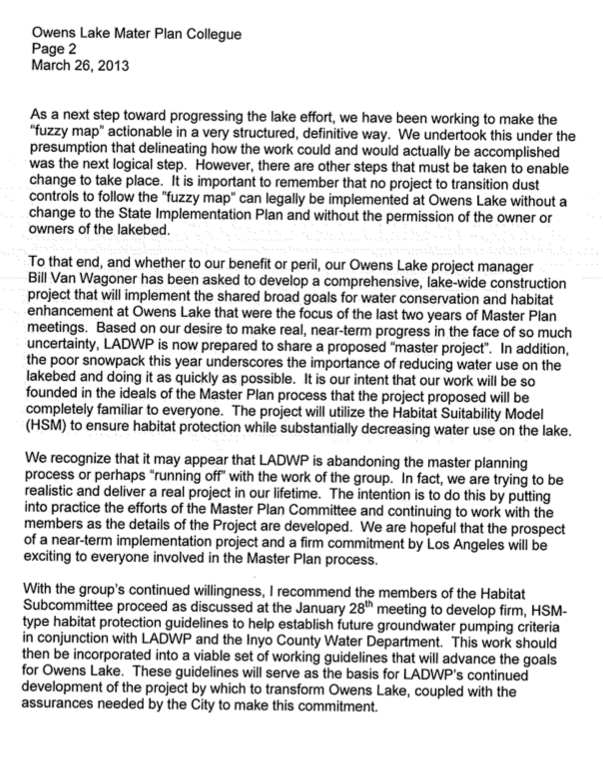 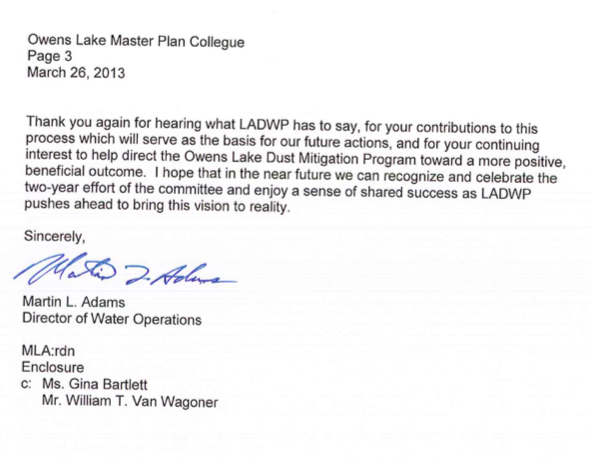 Audubon has been asking for a project proposal from LADWP for over a year in order to begin the CEQA process and ‘get the ball rolling’. We have worked with various parties in developing a habitat suitability model (HSM) that seeks to preserve the baseline habitat values at Owens Lake,… Read more »

Must say that I really respect the work of the Audubon Society and it’s members. The dedication to the health of our planet is reflected in their interests in the World of Birds. Members of the Eastern Sierra Chapter are Leaders in influential and powerful organizations, groups and Governmental Regulatory… Read more »

The only real solution for the dried up and dying Owens Valley and Lake is to dry up the LA Aqueduct and leave the water just be.
Free,

Classic and transparent DWP move. A lame effort to alienate those that are interested in habitat values at Owens Lake against the efforts of air pollution control. If DWP can’t afford to both control more air pollution and dry up existing control areas to save water, then we will take… Read more »

Water project could wreck ecology of the Snake Valley (Just like Owens) This fragile area is known as the Snake Valley, ground zero in the fight between Utah and Nevada over plans to divert water from an underground aquifer through a 285-mile pipeline to Las Vegas. Because the aquifer extends… Read more »

It’s time to man up, Marty!
Your beliefs are irrelevant.
The Clean Air Act is NOT negotiable.
No quarter!!

Philip, I love the pro-active solution. Anecdotal information; The thing that bothers me about my own water use is that I waste so much. How many of us have flushed tissue down the toilet? How long do we stand in the shower or leave the water running in the sink… Read more »

Water use per capita in Los Angeles is about half that in the Owens Valley. Their rate payers pay many times the cost per acre foot for water than Owens Valley residents do. Water from MWD is even more expensive, upwards of $1200 per acre foot. It is hard to… Read more »

That’s not what most people carp about. They dislike the death of plants and trees in the Owens Valley due to groundwater pumping. They dislike the condescending, bullying attitude of most DWP officials and the manipulation of citizens to go against each other. LA should conserve water. They are, in… Read more »

Show us a link to your water “facts”. Be sure to include washing driveways, car washes, freeway irrication and most of all, glof courses and swimming pools.

**Update – part of the controversy was that the per capita figures in Inyo and Mono counted all water going through fish hatcheries here and attributed to individual citizens. As I recall, the per capita water use figures here were calculated by using part of the diverted water. I’ll look… Read more »

No doubt that the urban areas of California have instituted water conservation programs that are good and necessary.However, to make comparisons between Counties where there are such huge demographic differences is a question not needed by many when there is such an apparent effect on the environment in the Owens… Read more »

Mr. Anaya, there is no mystery how the DWR calculates per capita water useage.

Your water district provides DWR their data along with a plan to reduce water use.

DT, I have to admit that you have linked me to a very complicated and mysterious 66 page DWR urban water use methodology web site that is way beyond my paygrade and understanding. My own water district however is my own well in my own back yard with no meter… Read more »

Tim, here’s what we do about warming up the water in the shower: we collect that water in buckets and keep it handy to recharge the toilet tank, thus using it to flush the toilet. We also, for what it’s worth, collect the water we use when washing produce before… Read more »

Good for you Alice! I think saving water needs to happen evrywhere. FYI Tortoise, I am in LA.

Martin L. Adams, Dear Sir, As a lifelong ratepayer of the LADWP, as an observer and a student of the actions and history of the LADWP, I have an interest in helping “to direct the Owens Lake Dust Mitigation Program to a more positive beneficial outcome.” Immediately, stop wasting my… Read more »

The people of Snake Valley Nevada are threatened with water exportation now as we speak. Their situation is nearly identical to that of Owens Valley. I wonder how many people will loose their farms, business’ and families to the hardship this will bring. Why not check in on their blogs… Read more »

Does anyone trust DWP?

Not a chance! One thing you can count on here is that they’re in it for themselves and no one else.

“You can’t fault a person for trying to do what’s best for his or her business.”

Funny, I don’t trust you either!