By News Staff on May 2, 2013 in Government Agencies/Utilities 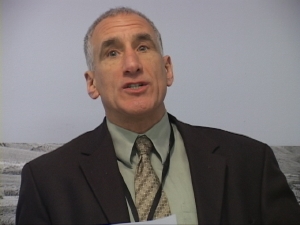 Will the Los Angeles Department of Water and Power start to charge Bishop and Lone Pine golf courses for the water they use? DWP Aqueduct Manager Jim Yannotta said he does not know yet whether the new golf course leases will require payment for water or not. He also spoke at length about the importance of the golf courses, and Inyo officials say new water charges would put the two golf courses out of business.

In a conversation with Yannotta, he spoke at length about the current situation, the changing times and how this may impact the Owens Valley. When asked if DWP is considering charges for water on other City-owned leases like city and county parks, Yannotta said, “As we become aware leases have expired, we will look at all of these things.” He said DWP must operate with leases that are “compliant with the City Charter and rules of water and power service.”

Asked to explain that, Yannotta said, “DWP can’t ‘give away’ water so we need to make a good case for a reasonable amount. The lease can’t be a gift to a business or group. It is supposed to be for fair market value.” Yannotta said, “The golf courses have intrinsic community value to Inyo County that is also important to LADWP and the City. We need to make a lease that is legal but that also makes the golf courses work for the community.”

He also said, “The City of Los Angeles Department of Water and Power wants nothing other than for both golf courses to thrive. This is important to the Owens Valley and to LA.” He went on to say, “On the other hand, it was brought to my attention that both golf courses are operating on expired leases.”

Yannotta said when DWP met with Bishop Golf Course officials, the first order of business was for them to be more water-wise. He said the golf course “irrigates way too much.” Yannotta said they need to be more efficient about where and how they irrigate and consider turf removal and drought tolerant plants.

He repeated that his goal is to reduce the amount of water golf courses use. Yannotta added that the existing leases were fashioned before there were issues with LA’s water supply. He said 34 years ago, DWP was importing three-fourths of LA water from the Owens Valley. Now, it’s more like half of what it used to be due to legal restrictions involving Mono Lake, Owens Valley and the Owens Dry Lake. He also pointed to climate change and predictions of a diminished snowpack. All of this, he said, is making LA more conscious of local water resources.

Supervisor Jeff Griffiths called the lease water issue a “squeeze tactic. It’s a different attitude than in the past few years. DWP seems to be under some kind of pressure to get water anywhere they can.” Supervisor Matt Kingsley said charging for water is “the kind of thing that could put the golf courses out of business.”

It seems to me that the people of LA DWP should be conscious of how they use water. What we use here in the valley is a drop in the bucket compared to what LA uses. I have an idea, let’s charge DWP a tax on every gallon they export… Read more »

The power of Los Angeles Department of Water & Power extends far beyond the L.A. Basin. In 1966 the Constitution of the State of California was changed to prohibit the taxation of water exported from Inyo and Mono Counties. L.A. was already anticipating the increased pumping and water exports from… Read more »

Anachronism, we are trying! We are developing a video series on these issues through the Owens Valley Committee, but we need support to make it happen!
http://igg.me/at/slake/x/2947420

Gosh…maybe they could throw a few crumbs to the peasants. For years DWP transferred its “excess funds” to the City of Los Angeles. Bear in mind, the DWP has the highest paid utility workers in the entire State, so “excess funds” really does reflect on the cheap price of the… Read more »

In Scottsdale they have really neat golf courses that conserve water and are challenging to play.
http://image.shutterstock.com/display_pic_with_logo/717385/717385,1311031980,3/stock-photo-golf-in-the-desert-near-scottsdale-arizona-81257320.jpg

Those moths are clogging the light bulb cover on my garage door opener. It is like something out of a Far Side cartoon.

DT,
Can you post a picture of the moths in the bulb cover?