After more than forty years of groundwater pumping by DWP, many of the water tables of the Owens Valley have never recovered even to 1987 levels. Even so, an LADWP Commissioner pushed for more export of pumped water to save LA money and then in an obvious contradiction claimed she gets concerned when man fools with nature. 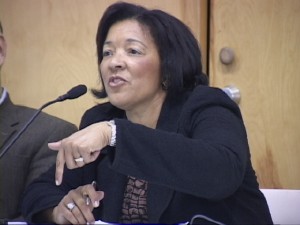 Commissioner Forescee Hogan-Rowles said that LA now has water rationing while the Inyo-LA staff drags behind on revisions of groundwater pumping regulations. “Do we have the ability to get more water to LA or not?” queried the Commissioner.

The DWP staff member patiently explained that there is a water agreement and that exports depend on run-off and plant conditions. The Commissioner did not give up. She wanted to know how much more LA has paid for water in the last three years while studies have gone on. She estimated $10 to $12 million more to buy Metropolitan Water District water.

Daniel Pritchett of the local native plant society told the Commissioner firmly, “Don’t think that you can pump 80-90,000 acre feet after the three year interim pump plan has expired.” Pritchett pointed to USGS studies that call 70,000 acre feet the top end of pumping for the health of the Owens Valley.

Later Commissioner Hogan-Rowles hammered staff members about removal of black locust trees to create a bird habitat under the water agreement. She professed her love of trees and said LA is trying to plant a million trees. “I’m surprised you’re removing black locusts here.” Hogan-Rowles said she’s concerned “when man starts juggling things.” Someone in the audience said, DWP has done plenty of “juggling” of the envrionment.

I asked Commissioner Hogan-Rowles about her contradictory statements – on one hand she wants more water from the Owens Valley with no concern for the environment, and on the other hand she gets “concerned when man interferes with nature”. How does she reconcile her own contradictions? She said she really wasnt speaking out of both sides of her mouth, feels there should be a balance in the water issue here. She did not say how a balance would protect the Owens Valley environment.

As usual, the Standing Committee members took no action and engaged in no real serious debate.

We work to provide daily news to all of the Eastern Sierra, in the tradition of Eastern Sierra News Service and the Sierra Wave. We bring you daily happenings, local politics, crime, government dealings and fun stuff. Please contact us.
View all posts by News Staff →
Inyo Assault and Mono Child Molest Cases Still in Court
More Views on Police Coverage in Mammoth Lakes