Sometime in the 90’s, the courts, state regulation and the local Air Pollution Control District forced LADWP to clean up the toxic dust of the Owens Dry Lake, considered the worst pollution source of its kind in the Western Hemisphere. Now, with a few more square miles left to clean-up, DWP has hedged on the use of more water to protect Inyo’s air quality. 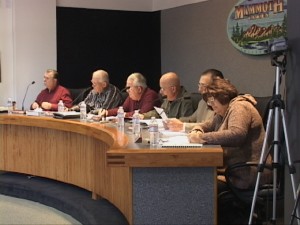 APCD Board mixed in its views of another DWP delay.

Monday, at a meeting of the APCD Board in Mammoth, Director Ted Schade pointed to what DWP has done – spent $500 million and clean up some 85% of the lake bed. Now, DWP must by order clean up 3.5 square miles. LA wanted to use high rows of dirt to keep dust down, called Moat and Row, but the State Lands Commission, which owns the lake bed, so no.

LADWP Chief David Freeman stood up to say that he was asking for more than mercy. He wanted understanding. Freeman said he feels like a ping pong ball between the State and APCD. Freeman, a master at public relations rhetoric, said he wants to do the best job for Inyo’s children and grandchildren. His long-term goal is solar panels on the lake bed and 100% control of dust, plus habitat improvement.

In so many words, Freeman said DWP has done a lot, how about a time extension on the October 1st clean-up deadline. Regulation allows APCD to charge DWP $10,000 a day in fines for missing the deadline. Freeman pled to get out of that, too. “This gun to our head,” he said, “is not comforting.”

State Lands Commission Chief Paul Thayer said the State has a duty to protect the public trust. He said Moat and Row will not add to public lands beauty, access and use. He said it will all take more time.

Inyo Supervisor Linda Arcularius argued for less use of water since the State has a shortage. She also pled for Moat and Row, although there is no proof it will keep dust down. She said some of the water LA saves could stay in the Owens valley, although DWP has made no such promises.

Mono Supervisor Hap Hazard said the board worked with DWP on a drop dead date of October 1st,and he said to Freeman that if he feels like a ping pong ball or with a gun to his head, it’s self-inflicted. Hazard was not willing to give up the daily fines if DWP failed to meet the deadline but said the district might hold the fines in abeyance. Supervisor Byng Hunt said he would allow some more time but then impose fines if that failed.

APCD Director Schade said sometimes the only way to make DWP perform is with a gun to the head. He said DWP needs to wrap up their clean-up duties. With mixed messages, the issue ended. Schade said he is inclined to let things develop and talk later. With recent and violent dust storms in southern Inyo, citizens want it all to end. Mel Joseph, Environmental Director of the Lone Pine Tribe attended the meeting. He said he was glad to hear Supervisor Hazard hold the line on a deadline for DWP.

We work to provide daily news to all of the Eastern Sierra, in the tradition of Eastern Sierra News Service and the Sierra Wave. We bring you daily happenings, local politics, crime, government dealings and fun stuff. Please contact us.
View all posts by News Staff →
Dog Sled Tradition Jeopardized
Bureaucrat Beat: Our Money, Girlymen and Dead Beats