On KABC Eyewitness News recently, DWP Interim Manager David Freeman told a reporter that LA wants to make the Owens Valley its “solar park”. Freeman took his solar power plans to Bishop this week for secret meetings with select groups. The media and general public were not invited. 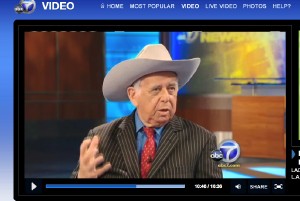 On KABC, Freeman responded to questions about renewable energy for LA. He said, “We’re looking at the Owens Valley for our solar. We own it lock, stock and barrel. Some people think we stole it, but LA owns a huge area up there.” LA’s mayor has demanded that the City get 20% of its power from renewable sources by 2010.

Freeman went on to say that the Eastern Sierra has the best sun in the whole state. He said LA has transmission lines that go up here. Freeman declared, “We’re taking a hard look at the Owens Valley as our solar park.”

Apparently, to control public reaction to his solar agenda, Freeman arranged for private meetings at DWP headquarters in Bishop with county and city officials, state and federal officials, ranchers, chamber of commerce and environmental groups.

We called DWP to arrange attendance at one of the meetings. DWP Manager Gene Coufal told me the meetings were “private to gather input on proposed options in the Eastern Sierra.” Coufal said there would be follow-up meetings with others later.

The current approach by Freeman leaves locals wondering what control they will have over DWP’s erection of a reported 80 square miles of solar arrays in Inyo-Mono.