No rave review for the Los Angeles Department of Water and Power land auction. Just 5 parcels out of 24 sold for a total of 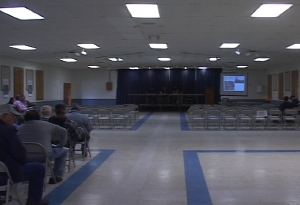 A sparse audience for the land auction.

$670,000. This paltry number does amount to more than the last auction in which finally only 1 parcel sold. Officials believe the economy put a damper on land sales.

DWP Manager Clarence Martin said, “I think it’s the economy right now. Nobody wants to let go of money.” Martin pointed out that DWP appraised the properties a couple of months before the auction, so the prices were not inflated.

With the cost of building on vacant land and the property cost too, most stayed away from the chance to own land in Inyo County.

The lots that sold were on Center Street in Big Pine, 9 acres in Laws, 2 lot on School St. in Big Pine and one lot on Clay St. in Independence. These lots are part of the 75 acres listed in the LA-Inyo Long Term Water Agreement for release. Trouble is, the land is released through an auction and nobody’s buying.

The auction of land was delayed considerably over the years. The original agreement was signed in 1991 with a follow-up agreement in 1997.

Will DWP try to go to land sale again? Mr. Martin said that the staff had gone to the Water and Power Commissioners and got permission to do a re-appraisal to go back to auction if the most recent auction did not succeed.

We work to provide daily news to all of the Eastern Sierra, in the tradition of Eastern Sierra News Service and the Sierra Wave. We bring you daily happenings, local politics, crime, government dealings and fun stuff. Please contact us.
View all posts by News Staff →
Dog fans – must have quilt in ICARE raffle
Snowboarder at Mammoth Mountain runs into snowcat, suffers major injuries