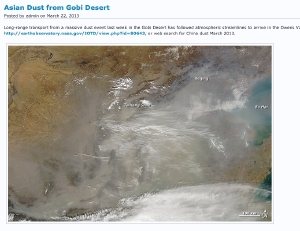 Why has our air looked so hazy since last Friday? It was made in China, you might say, and blown across the globe to California.

Hard to believe, but Great Basin Unified Air Pollution Control District Director Ted Schade confirmed it. NASA documented by satellite the Gobi Desert phenomenon. Schade said that in the Spring sometimes a really fast jet stream moves over Asia, to the north and over to Alaska. Then it blows right down over California. What many here thought must be smoke from a fire is, in fact, dust from Asia.

Great Basin’s Air Blog said, “Long-range transport from a massive dust event last week in the Gobi Desert has followed atmospheric streamlines to arrive in the Owens Valley today.” That was on Friday. NASA’s article on this event said dust from the Gobi Desert blew across the coastal plain of eastern China. Beijing has experienced two dust events in March.

Ted Schade said this kind of event happens once every couple of years. He said the jet stream creates a kind of blanket effect in California from the dust on the other side of the world.

The Gobi Desert is considered the fifth largest desert in the world and the largest in Asia. It covers 500,000 square miles.

Yeah we can blame China for burning so much coal, but they are only catching up and taking the lead to the trend we started. It’s too bad the legalized bribery that goes on systematically in our country is keeping the American People down from setting the trends (Green Energy)… Read more »

UCSD/Scripps was part of a paper just published in Science showing dust and microbials from Africa as well as Asia.

Mike, I thought it was telling that California Energy Commission did a study proving the earth cooling effects of irrigation in the San Joaquin valley, yet the potential cooling effects of a full Owens Lake are ignored and even disputed at times. http://ateson.com/ws/r/www.pnas.org/content/104/34/13582.full http://www.energy.ca.gov/pier/project_reports/CEC-500-2006-031.html http://faculty.ucmerced.edu/lkueppers/publications.html You’ll notice that cooler summertime… Read more »

Assuming that LADWP had done it again was not too smart or logical on my part. The drive back to Bishop from Lost Angeles is usually better and better with each mile north but Friday was an exception. The winds were not blowing and the Owens Dry Lake was calm.… Read more »

Well Benett – everything else is made in China, why not the haze?

Made in China ??…..Uh-oh……Some are gonna blame President Obama for it…..

Does this mean that air polution or a nuclear disaster in China could also blanket California in fallout courtesy of the jet stream? How will this impact the EPA stove upgrade program or antique can and bottle collection enforcement by BLM?

C’mon you guys, that stuff I said is cynical and sarcastic, where’s your valley spirit? Where is your sense of humor? Truth be known, I really like the article, it clearly implies that our problems (Shooting area trash, bottle collectors, stove upgrades), while significant, can easily be shadowed by global… Read more »

Tim,
What I’ve found to be useful in email correspondence is to indicate somehow that the comment was cynical and/or sarcastic:

Otherwise, everythink resembles the Tower of Babel story and/or The Rush Limbaugh Show

Sarcasm is hard to pinpoint in text, also depending on the readers state of mind at the time the text might not be perceived as sarcasm, and most of the time the reaction to that mis-interpretative punch line is of course associated with the act of “Foaming At The Mouth”.… Read more »