By News Staff on November 25, 2013 in Government Agencies/Utilities 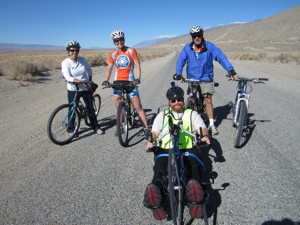 Disabled Sports Eastern Sierra’s Summer Cycling Group started the summer of 2013 with the “Six Million Dollar Man”-esque goals of making themselves “better, stronger, faster.” By the end of the season’s last ride on Oct. 30, the cyclists who make up the group had achieved these goals and more.

No one was more pleased with the results than DSES’s Paralympic Sports Coordinator Maggie Palchak. “It was the most dramatic difference I’ve ever seen,” she noted. “The leaps in strength and in attitude, the competitive spirit, and the mindset of making it part of their lifestyle to get out and ride their bikes around town has been just fantastic.”

The group is an offshoot of DSES’s eight-year old Summer Cycling Program. Four years ago, local Bishop cyclist Donny Tobias, who lives with Cerebral Palsy, became passionate about establishing a group of athletes to go out on rides. Originally, the group met from mid-August until the start of skiing. Two summers ago, the group decided to make the season longer, and now rides from mid-June to the end of October.

“This year we vested the athletes with more independence,” Palchak observed. “Instead of us contacting and reminding them every week, they had to tell us they were coming and make the commitment to be there.” Palchak also said goals were set, some opting to work on health concerns such as weight loss, others aiming to go faster. And to make the meetings about more than just going out and riding, skill sets were also worked on, including peddle strokes, changing gears, braking, hill climbing and more.

“The athletes were surprised to see how attainable those goals were,” Palchak recalled. “Nate vastly increased his distance, Amanda went further and faster, Arlene focused on losing weight and changing her diet as well as riding further, and Xan, who’s only seven, not only got off training wheels, but did an 11-mile loop on the last ride. Brigid also progressed into a newly modified bike in which she could be more athletic.”

Perhaps most important, Palchak is thrilled that the athletes’ horizons were broadened, thanks due in no small part to the bonds they forged with their dedicated team of DSES volunteers. In addition to accompanying the group on rides, the volunteers provide support functions, including bike maintenance, and making sure the riders are comfortable and ready to ride safely.

“The group went from laughing about being part of the [Eastern Sierra’s annual] Fall Century Ride to riding in it and saying they want to do more miles in it next year,” she added. This year, 11 DSES cyclists entered the event, far more than the 1-2 who entered in previous years. Will there be even more riders next year? Time will tell, but meanwhile, Palchak is already at work on ideas for next year’s group.

We work to provide daily news to all of the Eastern Sierra, in the tradition of Eastern Sierra News Service and the Sierra Wave. We bring you daily happenings, local politics, crime, government dealings and fun stuff. Please contact us.
View all posts by News Staff →
LA River plans dwarf LORP
Inyo Search and Rescue handles boulder fall and hikers stranded by snow