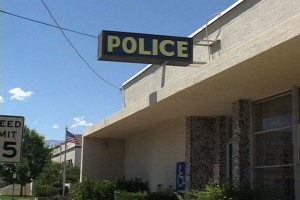 When Bishop Police Chief Chris Carter spoke to the Bishop City Council this week, he briefly described an arrest that involved very effective team work by his staff and ended in the arrest of two people.

Sierra Wave Media talked to the Chief for more detail. He explained that last Sunday night, Officer Brent Gillespie saw a vehicle come through the City at great than the speed limit. The vehicle also had illegal, tinted windows.

The officer made a stop. The on-duty dispatcher checked out the details and informed Officer Gillespie that the two occupants of the vehicle had been stopped in an out of state vehicle at another time by another officer.

The Chief said Gillespie grew suspicious and investigated further. Chief Carter said there were “other indicators” that tuned Gillespie into the fact that the two people were possibly transporting drugs. Gillespie asked them to go to the police department and there he and his K-9, X-ray, searched the vehicle.

The Chief said Gillespie found two hidden compartments constructed in the vehicle under the driver and passenger’s seats. In one of the compartments the officer found a large amount of packaged U.S. currency. Chief Carter said it was more than $10,000. He said the K-9 made an active alert on the money indicating that it was drug proceeds with the scent of illegal drugs which the K-9 is trained to detect.

The suspects, Chief Carter said, could not explain the illegal compartments and the cash. The Chief said the money was seized and the two arrested. Investigation into this case continues and no more details are now available.

Chief Carter called it good teamwork by the dispatcher, officer and K-9. He added that if people doubt that there are regular amounts of drugs and cash on 395, this incident adds to the confirmation.

BPD is getting more dope off the streets than INET. Great job BPD. INET has a great career path..narcotics to bailiff. Or maybe narcotics to casino janitor.

Note to self; if a Bishop P.D. officer ask you to go to the police department after handing you a traffic ticket say no I don’t have time.

Sean- I think you and the police are probably correct, but I doubt they will convict them of a drug charge.

These guys are just money mules. What happens to them doesn’t really matter. What matters is where they were coming from and where they were going. Hopefully evidence was gathered to help the narcotic detectives find their way up the drug dealer food chain. Regarding the hidden compartment discussion the… Read more »

What do you mean what happens to them doesn’t really matter? these guys are just money mules?
You saying they are just expendable so it doesn’t matter? Explain if you don’t mind, or not because you know I am gonna dissect what I don’t agree with.

No just when you hide your money or your gold … they will seize it and or arrest you … I just don’t think that is right .. you can say it is specific to the drug trade .. but that does not stop an individual from being suspicious of… Read more »

I agree Big Al, I’ll buy lunch of if the D.A. successfully prosocutes for the hidden compartment.

Kudo’s to the officer though for getting the morons to drive to the Police Department to have their vehicle searched. I’m sure he could also sell ice to Eskimos.

How do we know these guys weren’t just hiding their gambling money from their wives ? Must of been Raven fans 🙂

“Gillespie ASKED them to go to the Police Dept….AND THEY WENT ? I’m all for getting drugs (and drug money) off the streets, but it seem s that these idiots didn’t know that they could say NO…HELL NO !

Big Rick, If they were under arrest, don’t think they could refuse.
BK

That’s what I am talking about Mark A big waste of resource’s. I don’t know about y’all but I plan to be here for another 50-60 years and this unsustainability that our way of lives feed into is a real treat to me and my family cause honestly I don’t… Read more »

Um … Benett … the article doesn’t say they were under arrest .. they were asked to go to the PD .. So they weren’t arrested until they failed the hidden compartment test.

yeah, it embarrasses me to no end that are local pd and chp pull over every car they can going to burning man. I met an older gentleman a couple weeks ago, he says ‘doesn’t matter how slow we go, we know we’ll get pulled over somewhere in mono or… Read more »

What does Burning Man, Mass Shootings, Terrorism, and Nazi-like behavior (according to you) have to do with a Bishop PD Officer making a good traffic stop and having the skills and experience to know he was on to more than just traffic violations? Would you prefer he be parked behind… Read more »

We all benefit from having police to serve and protect. What are they to do if they don’t agree with a section of codes they are to enforce? They have a job to do, and a noble job it is. (Tilt of thee hat). In this day and age we… Read more »

If we were profiling muslims at airports then why does my junk get felt up when I travel?

I agree with you sierragrl about the idea that having a secret compartment in a vehicle is against the law. That is just one of those laws made to help nail people for things when they’re doing something wrong, or in the case supposedly did something wrong. I am not… Read more »

I dont thinks its “whites” doing all the murdering in Chicago[which by the way has the toughest gun control in the US] or inner cities.

Yeah it has the toughest gun laws but it is a island of gun control surrounded by a sea of guns so your reference holds no weight.

I disagree Jerry … statistics have constantly shown, where gun laws have been enacted, crime rates go up. You could gun ban the entire ocean, but will not be able to stop guns from being used by people do to bad things. Criminals do not respect the law, they only… Read more »

It’s a utter failure to combat the drug user’s. And the whole drug war has wasted so much tax dollars and what are left with? what progress have you seen in any of those high crime areas? And nobody is immune to becoming a addict or having somebody close to… Read more »

I know my facts … I know what I see, so don’t try to profile any one group .. that is just being hypocritical! … I never said .. Eurpoean Americans do more or less then African Americans, than Hispanic Americans, than Asian Americans or purple people eaters. The fact… Read more »

You take issue with the cops pulling over people going to burning man? It’s no secret what goes on at burning man…but how is does that connect to racial profiling? You say “shouldn’t we be profiling white males?” Well…..that’s mainly who goes to burning man so my guess is..yes, they… Read more »

…and another thing……WHY do these drug dealers do such stupid things while they transport ?….speeding through town,tinted windows, probably the music blaring,etc…Now IF I were to do such a thing,I’d drive the speed limit in an old vehicle,drawing less attention to myself….Now before people start posting and defending these “runners”,what… Read more »

Pretty stupid on their part to get themselves into trouble all on their own accord.

Can we skip the stereotyping of the “sleazy” defense lawyer. One day, when you are accused of a crime you are not guilty of, some “sleazy” lawyer may keep you from 20 years in jail. Innocent until proven guilty. Did you know the California Innocence Project frees several inmates a… Read more »

Just because a lawyer holds the aurthorities to the letter of the law doesn’t make them sleazy. The lawyers that do this are actually patriots for standing up for our constitutional rights.

Scott and Mark…yeah,your probably correct there….My mistake was maybe watching O.J.Simpson get away with murdering two people,while his lawyers knew he was guilty of the crime….and then seeing Casey Anthony walk free after killing her 2 year old daughter,hoping and getting the jury to believe her lawyers lies about what… Read more »

What can I say? That’s the way the system works.

Wayne, I heard the other day, that there is speculation that O J didn’t killed his wife and her boyfriend. Some sort of evidence that was found, I think?

….Maybe these guys should have laundered their money……literally…..run it through the wash cycle at the neighborhood laundramat…..

Yes Officers we don’t need the proof of the evils out there. We see the effects on a daily basis, I am speaking for myself that if you think we doubt there is drugs out there then you are far from the reality or you should get out and talk… Read more »

Correction, I really doubt the practices currently used are the best if the purpose is to keep it out people’s possession, Don’t take it personal I know all these cops have a job to do. but the problem is getting worse, not only in the consumption of toxic substances, but… Read more »

I will add that the Chief said creating compartments in a car, such as in this case, is also illegal. In addition to the K-9, the humans connected the dots
which also led to the arrest.
BK

The Chief should have stated section code. They’ll have a tough time convicting from what I read; to establish a violation of Section 863 in a hidden trap case, the following elements must be established beyond a reasonable doubt: 1) The perpetrator sold or offered drug paraphernalia for sale. 2)… Read more »

I know huh, you can’t have a secret department but you can have a bunker full of guns and ammo with the mind set of. . . . I will stop there.

Libertarians arent right wingers….the are left,right, and in the center.Learn your terms.