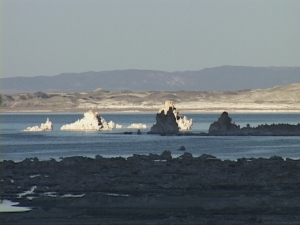 It was higher a year ago, a foot and a half higher, but the level of Mono Lake has not dropped far enough for the Department of Water and Power to reduce its water exports from Mono Basin. 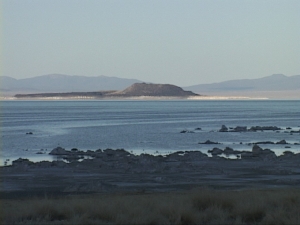 that measures the lake level. They agreed it was 6,380.7 feet above sea level. If the level reaches 6,380, DWP must cut back its exports from 16,000 acre feet to 4,500 acre feet. It’s close to that threshold now. If the lake level should drop to 6,377 feet, diversions to LA would be suspended. As a result of the conflict between DWP and the Mono Lake Committee and the resolution, there are hard and fast rules overseen by the State.

McQuilkin said that with lake level facts now in place, DWP and the Committee will send a joint letter to the State Water Board confirming the arrangement this year. The past three years of drought have caused Mono Lake’s level to drop, but even so the Mono Basin is the wettest watershed in the State with 57% of normal.

The status of DWP’s exports from the Mono Basin will rise or fall on next winter. If it’s another dry year, Mono Lake’s level will likely drop below the threshold that means an export reduction. If it’s a strong winter, exports will continue as they are.

As for stream restoration work in the Mono Basin, McQuilkin says that’s moving forward. The State Water Board has the signed settlement on restoration and is at work on language. McQuilkin said the Mono Lake Committee, Department of Fish and Wildlife, Caltrout and DWP met recently and are moving ahead with plans.

For visitors to Mono Lake, the drought impact may be obvious with a kind of white bath tub ring around the lake from last year’s drought. More tufa will be exposed at the Old Marina and at South Tufa. The land bridge to Negit Island will grow but Negit remains an island. That’s a critical sea gull nesting place.

Yet DWP is dumping 200cfm down the East portal diversion to the Owens river.