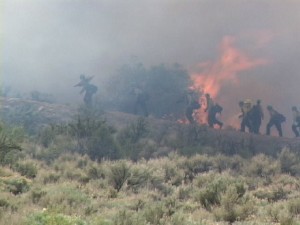 A significant drought in the West points to potential and serious fire danger.  That’s why the Unified Command of Inyo County held a special meeting Thursday.  Head of the Command, Inyo Sheriff’s Lieutenant Jeff Hollowell confirmed that there is a severe risk for this summer and that’s why planners, first responders and agencies put their heads together.

Lt. Hollowell said the meeting got everyone on board to prepare for response if needed.  He also said that via teleconference a federal agency communication center meteorologist explained the dry conditions and watching continuing weather as it may affect fire danger.

Hollowell said everybody in the state is gearing up for the season.  Hollowell said officials hope citizens will do their part by creating defensible space around their homes and preventing fire hazards. The agencies and firefighters, he said, will be ready to do their part.