At the end of February, Governor Schwarzenegger issued an emergency drought proclamation that called for careful use of what has been called a reduced supply of water in California. However, Mammoth water officials point to recent storms and an increased snowpack which makes the Eastern Sierra somewhat different. 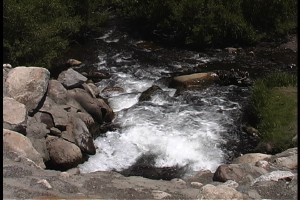 In a press statement, Mammoth Community Water District officials say that the water supply conditions in the Mammoth Lakes Basin do not always correlate with those of the State Water Project. On top of recent storms, officials say Mammoth still needs a snowy spring to continue to build up the snowpack to alleviate potential drought conditions.

Officials say that if a drought year unfolds, they will make a determination on the severity of the drought and the level of restrictions necessary to meet the community's water demands. They point out that in drought years, Mammoth depends more heavily on groundwater which costs more.

We work to provide daily news to all of the Eastern Sierra, in the tradition of Eastern Sierra News Service and the Sierra Wave. We bring you daily happenings, local politics, crime, government dealings and fun stuff. Please contact us.
View all posts by News Staff →
Inyo County Back From the Budget “Abyss”
Where Can Mammoth Dogs Run Free?