The Owens Valley Committee is sponsoring the screening of the film “The Longest
Straw” the week-end of November 17-19. You will have three opportunities to see
this award-winning film. Admission is free — donations are gratefully accepted. All
showings are at 6 p.m. 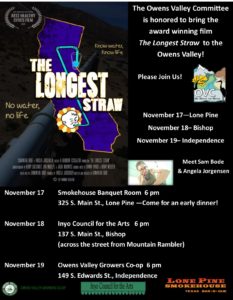 In 2013, documentarian Samantha Bode and film producer Angela Jorgensen teamed up to pursue a deceptively simple idea. Most of the drinking water in Los Angeles comes from hundreds of miles away. With drought looming over the state and urban conservation efforts sluggish, the pair determined that the greatest problem facing Los Angeles was its population’s disconnect from their water source.

“Since we’ve figured out that we can move water from an area to another area, people don’t have that connection with their water,” said Bode, explaining her inspiration for filming the long journey that the City’s water travels.

Four years later, the hike has been completed, but what initially struck the pair as a
simple idea ended up being more complicated than could be anticipated. In
addition to her camping gear, Bode carried filming gear to document her trek,
pushing the weight of her pack up to nearly 60 pounds. By comparison, an average
backpacker’s backpack weighs roughly 30 pounds.

Bode also had to set her own route. While she wanted to travel alongside the Los
Angeles Aqueduct and the Aqueduct extension, which runs from Lee Vining (near
the eastern entrance to Yosemite National Park) all the way to Sylmar, just north of
Los Angeles, Bode’s route included frequent detours as the aqueduct climbed
insurmountable sheer cliffs, wound through underground tunnels, and disappeared
behind fences.

Initially, she anticipated her hike to be roughly the Aqueduct’s length
of 338 miles, but her final journey proved to be much closer to 400 miles.
Logistics provided challenges as well. “For about a third of her journey, Sam had
to walk through the Mojave Desert,” said Angela Jorgensen, producer. “There are
few natural water sources there, so we had to place two water caches per week,
which I would leave on the week-ends.”

Usually for projects this complicated, large crews or even corporate funding can
help smooth the edges. Not so for this pair. Bode and Jorgensen both work fulltime
jobs outside the Aqueduct project, meaning the planning, fundraising, and the
journey itself were done on their own time. While they were able to generate
enough money using the crowd-sourcing site Indiegogo to cover most of their
hiking and filming costs, the pair also funded the project largely out of pocket.

While the Los Angeles Aqueduct has been controversial from its time of
construction in the early 20th century, wreaking ecological disaster and serving as a
lightning rod for political rebellion in Eastern Sierra Nevada communities, the issues
covered in The Longest Straw strike especially close to home in drought-stricken
California.

By depicting the epic struggle surrounding the City’s water, Bode and
her crew hope to bring home the importance of water conservation, prioritize the
development of local water sources, and guide people to a deeper appreciation of
water as a shared resource.

The Longest Straw was completed in April of 2017. Since its release, it has screened at the Big Pine Paiute Fall Fandango, as well as the 2017 New Urbanism Film Festival where it won an award for the “Best Healthy Cities Film”. The Longest Straw is also a Semi-Finalist at the Los Angeles
CineFest.