On the evening of Saturday, May 18, at 7:25 pm, the Mono County Sheriff’s Office received a 911 call for assistance needed for an injured skier in the Sierra near Bridgeport. 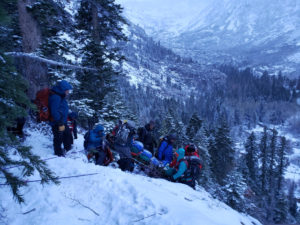 A 29-year-old man from San Francisco had fallen while skiing in the west Couloir/Gully on the Incredible Hulk in the Hoover Wilderness.

A party of 3 had hiked in from Mono Village, waded across Robinson Creek (which as expected for springtime was running fast and cold), and continued up Little Slide Canyon. About 30 minutes after crossing the creek, they hit the snowline, and put on their skis and skins and continued up the canyon.

As the terrain became steeper below the entrance to the couloir, they removed their skis and boot packed up the couloir. On the descent, one of the skiers fell from about 3/4 height, and tumbled and slid down the couloir, and when the fall ended, he found he had multiple left leg fractures, but most notably an open tib-fib with considerable bone exposed. The accident occurred at approximately 2 pm. 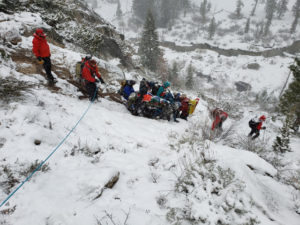 The injured party was one of a group of three, and one-party member activated a personal locator beacon (PLB), but no PLB activation was recorded or noted. Another member of their party hiked out to Mono Village to call 911. The Mono County Sheriff Search and Rescue Team was called out at 7:37 pm and sent three field teams totaling 18 personnel to respond to the incident site.

The weather was cold, and as the field teams were gathering gear, it began to snow. All teams departed well after dark; it is about 3 miles in on the trail, and just past the wilderness boundary, the field teams left the trail and found the downed tree crossing.

There is a use trail on the south side of the creek that leads into Little Slide Canyon, and all field teams used this and the downed tree bridge instead of wading the creek.

At base the decision had been made to send the field teams with snowshoes as few folks had skis, skins, and ski crampons.

Little Slide Canyon was covered in deep snow, and is quite steep in places, and the Team’s technical snowshoes were well suited to the terrain.

At approximately 2 am, the Search and Rescue Team located the injured skier in moderate snowfall. 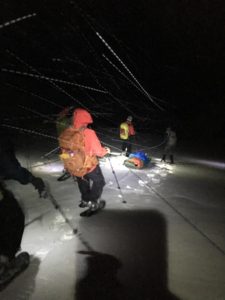 He was treated for multiple left leg fractures, including an open tib-fib fracture, and was packaged in a rescue stretcher and lowered many rope lengths down the steep snowfields in Little Slide Canyon. The SKED litter was lowered approximately 800’ via anchored belays, and then carried/dragged over the snow to the snowline.

At the snowline, the subject was loaded into a wheeled litter, and the field teams descended the climber’s use trail, belaying the litter haul team through many difficult and exposed sections of the use trail in 4-6” of fresh snow.

Multiple belays were built to safeguard the Team and the subject as they continued the sketchy descent. The belay teams were leapfrogging to keep the litter moving, while preventing falls into the abyss. After many, many belayed sections down the sketch use trail, the field teams arrived on the valley floor. 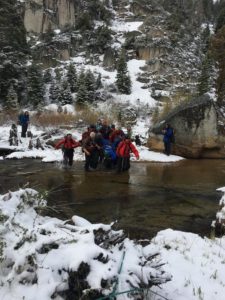 The litter haul team waded the icy cold Robinson Creek and descended the Barney Lake Trail back to the rescue base near Mono Village. A Mono County Paramedic crew met the field teams at rescue base and patient care was transferred to the medics.

Due to the severity of the subject’s injuries, the Mono County Medics transferred the subject to Care Flight for immediate transport to definitive care.

The Team displayed extraordinary teamwork, competence, and professionalism in successfully effecting this extraction and rescue. At one point there were 18 personnel out in the field, and 16 of those were out for the entire duration from 7:37 pm on Saturday night until 9:14 am Sunday morning, a tremendous effort. 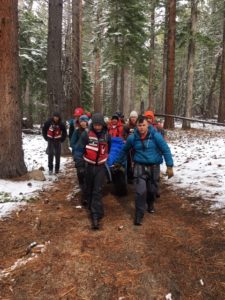 www.monosar.org for more info and images

Kudos to Mono SAR! That was an epic rescue!

The eastern Sierra SAR teams routinely do a great job for people (or even dogs) in trouble in difficult places. Big thanks to all of them!

WOW !!!…..Looks like the Mono SAR did a great job with this one in bad weather,night-time and difficult terrain….