Main St. Mammoth could see more major changes in the future. The planning process toward that end has moved ahead. 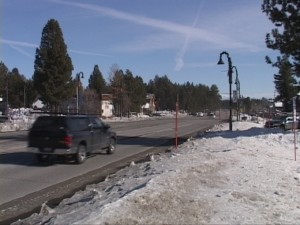 According to Town staff’s agenda bill, “The Framework provides the overall guidance for the DNDPs, defining the study area and major issues to be addressed in greater detail through the process.”

Mammoth Mountain is the applicant for this NDP. They have selected a focus group of 14 people that will work on the NDP. The participants in the focus group include Main Street business owners such as Tom Cage, as well as environmental experts such as Dan Dawson. There will also be larger, community meetings to discuss what the community wants in this planning area.

To organize and facilitate the planning of this large area, five sub-areas have been identified. Sub-area one consists of the Gateway/Civic Center, North Old Mammoth Road and the Welcome Center. Sub-area two consists of Center Street and the Post Office. Sub-area three is the Shady Rest District. Sub-area four is Mountain Boulevard and the north/commercial end of Sierra Valley Sites, and sub area five is Viewpoint Road and commercial lodging uses.

Tentative dates for the public meeting process allow for the DNDPs to be wrapped up by early 2010. The first public workshop will be scheduled for mid-October.

We work to provide daily news to all of the Eastern Sierra, in the tradition of Eastern Sierra News Service and the Sierra Wave. We bring you daily happenings, local politics, crime, government dealings and fun stuff. Please contact us.
View all posts by News Staff →
Bear Problems Plummet, Concerns Continue
Caltrans Helps Northern Inyo Hospital