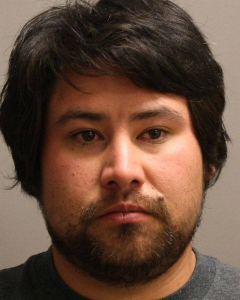 On August 25 at approximately 1:50pm Inyo County Sheriff’s Dispatch received a report of a possible stabbing victim who was in the area of Red Hill Road, and Ed Powers Road. Inyo County Sheriff’s Deputies arrived and contacted an adult female who reported she was attacked with a sharp object, resulting in injuries to her hand and neck.

While speaking to the female victim it was learned that there was another victim located at a residence on Rocking K. Inyo County Sheriff’s Office Deputies and an ambulance from Symon’s responded to the residence and located an elderly male who had also been attacked. The elderly male was transported to Northern Inyo Hospital by ambulance.

A Major Investigations and Narcotic Team (MINT) Investigator responded and interviewed the victims, along with a witness, and identified Robert “Roy” Horton, as the suspect in the attacks. A multi-agency search was conducted in the surrounding area; however Horton could not be located. A CodeRED was initiated to the communities of Rocking K and Mill Pond advising residents to be on the look-out for Horton and to report any suspicious activity to the Inyo County Sheriff’s Office.

At 10:00pm Inyo County Dispatch received a report of a male subject located sleeping in a bedroom inside a residence on Running Iron. The male was woken up by the homeowners and was asked to leave. The homeowner described the male subject to Sheriff’s Deputies, and based on the information received it was determined to be Horton. Another search of the area was conducted with negative results.

I’m not afraid to say sorry for stuff I say once in a while Dave. I sort of am. I just hope people realize that we don’t have total right to free speech. We have a right to say what we believe is true. Ya all ought to check it… Read more »

Trouble….not beating my chest or talking tough at all…I’m an old skinny guy,far from a tough guy…but in my long life,it’s taught me some lessons…being robbed at gunpoint a few years back,my home burglarized twice,beat up by gang members at a AM/PM Mini Mart (all that happening while living in… Read more »

David, I’m almost amazed that guy that who just got done beating his chest, saying he won’t waste time calling 911 and worse, would want to give up so many of his civil liberties and rights in the name of public safety. Ya wanta talk about it?

Trouble…My opinion,more the issue of public safety than it is punishment….some of these guys running the streets,no jobs,getting in and out of trouble…into drugs and alcohol abuse…domestic violence…sometimes a stint in jail will teach them a lesson and maybe turn their lives around some and come out a better person… Read more »

..Trouble,it’s not that we “don’t like him”…..those that break the law usually think they are above the law and do what they want thinking with no consequences for their actions…don’t you think what this guy “allegedly” did was a violent act ?…I’m with “Just Sayin’ ” on this one…if someone… Read more »

Steve and David, I agree he is probably violent and probably nuts. If he wasn’t defending himself he should get locked up. I just wish people would stop supporting basically burning people at the stake, in the name of justice. Look at what your doing and saying in the name… Read more »

If all you lock them up a throw away the key folks, would stop cheering for everyone you don’t like to be caged, maybe our prisons would have space for the truly violent people.
We have more caged people in this country then China.

He stabbed two people. I think he might be one of those ‘truly violent people’.

Steve…..get a load of this….on another site,one of his defenders,more or less saying he’s a good “child” and being “picked on” again by LE with this arrest,and what a great kid he is…they are saying the sharp object he (allegedly) stabbed two people with and was waving around when Law… Read more »

This cock-eyed jackass is lucky he didn’t pick our house to crash in… he’d be sitting in the mortuary right now with half his head missing.

Just saying, I believe you.
I know people who live down there, same thing would have happened if he had crashed in their house.
This guy is SO LUCKY to be alive.

So you just shoot people in the head when they are asleep?

Pedro….maybe he should’ve given him a cup of coffee and breakfast in bed ?..no telling what would happen if some burglar,especially a wanted felon was woken up out of a deep slumber in your bedroom…..might have a firearm under the pillow….maybe a baseball bat or a knife..maybe check under the… Read more »

Just Braindead said he would have shot dead a sleeping man before knowing anything about the situation. We really need to teach critical thinking, and gun safety, in our schools.

You two need to read the article again and switch to Decaf.

Tinner……that would or never will happen….soon,we’ll be reading posts defending him, how he’s a good “child” being “picked on” by others,including Law Enforcement…..probably how the charges against him aren’t warranted,and had no intention of hurting anyone…in this day and age of little or no consequences for your own actions,he’ll be… Read more »

If found guilty, if he never saw the light of day again I’d be just fine with that.
I’m pretty sure he’s no stranger to law enforcement.