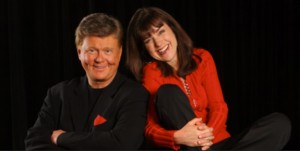 Deborah Johnson and Wayland Pickard will be appearing in a music concert for the Bishop Community Concerts Association.

They will be performing their variety show, including famous duets and Broadway to Hollywood numbers 7:00 PM, September 3rd, in the Bishop High School Dorothy Joseph Auditorium. Season’s Tickets will be available at the door or you can purchase early at The Sound Shoppe, 760-873-5991.

Bishop Community Concerts Association is a civic arts organization that has been serving Bishop since 1947 when a group of interested citizens saw a need for some attraction in the area in addition to the fishing and mountaineering experiences. Their goal remains “to offer our community the opportunity to experience the magic of live performance by bringing artist and audience together.”

DOUBLE GRANDÉ shows appeal to audience age range from 8 to 80…from the very young to the very young at heart, with a huge following of BOOMERS. They present a variety show filled with humor, music and romance crafted around the most popular music of the 20th century, performed by two award-winning artists. Two Grand Pianos & Two Grand Voices, Deborah Johnson and Wayland Pickard in DOUBLE GRANDÉ!

We work to provide daily news to all of the Eastern Sierra, in the tradition of Eastern Sierra News Service and the Sierra Wave. We bring you daily happenings, local politics, crime, government dealings and fun stuff. Please contact us.
View all posts by News Staff →
LADWP continues water supply through irrigation season
Lois Wilson: 1931-2015