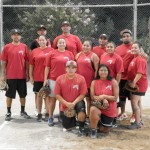 The championship game was on August 12 at 7:00 on field one at the Bishop City Park against Just NDN’s; Dondero Construction/Dondero Taxidermy came out and gave a solid performance to win the game 16-11.