To be art, or not to be art, that was the question at the July 15 Town Council meeting. According to the Town’s public art ordinance, a developer must either pay an in lieu public art fee, or place a piece of art on the property where the public can see it. 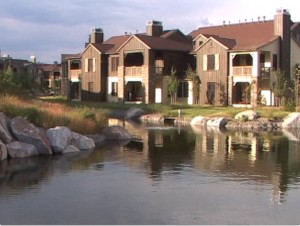 Chadmar, owners of the Snowcreek developments, had paid their in lieu art fee of approximately $138,000 for Snowcreek VI at the beginning of the project. According to the head of Chadmar, Chuck Lande, the fees had been paid with the intention of putting in public art later and asking for a refund. When he sent in the two payments to the Town, they were accompanied by letters stating that intention.

Planning Commissioner Tony Barrett, who had helped write the ordinance, was on hand to review what the ordinance said and what it was meant to do.

“The purpose of the ordinance was to have the developer take the natural setting and blend it with the project to make art,” Barrett explained.

So, four years after the project began and approximately 18 months after the project was finished, Lande was back and asking for his refund from the Town. He placed what he called a water feature, which he stated was art, within the project. The Public Arts Commission and Town staff disagreed and felt that the “water feature” was really just a spruced up drainage ditch. The Public Arts Commission had voted 2-1 to deny the refund.

Council members were divided on the correct thing to do, but for the most part wisely stayed away from trying to determine whether or not the water feature should be considered art. Instead, they determined that the implementation process of the ordinance was truly the troublesome point. They directed the Public Arts Commission to look at reviewing that process since the letters Lande sent stating his intention to always get the fee back seemed to have slipped through the cracks both in the Town offices and in Lande’s records.

“The question is whether or not he did more than what was needed for the drainage ditch,” said Mammoth local Bruce Woodward.

Council member Wendy Sugimura was also concerned about whether the public would in fact be able to enjoy the “art” since it was placed on private property. Lande stated that anyone could walk through Snowcreek VI and view the art. It was also pointed out that the ordinance just stated that the public should be able to see the art, not that they necessarily need to be able to walk up to it. So, if the art could be seen from the outskirts of the property that would satisfy the ordinance. It was not clear whether this was the case at Snowcreek VI.

Council women Sugimura and Jo Bacon still felt that they needed to trust the Public Arts Commission with their decision and voted against the refund. However, Council member Skip Harvey, Mayor Neil McCarroll and Mayor Pro Tem John Eastman voted to allow the refund and therefore, with a 3-2 vote it was approved.

We work to provide daily news to all of the Eastern Sierra, in the tradition of Eastern Sierra News Service and the Sierra Wave. We bring you daily happenings, local politics, crime, government dealings and fun stuff. Please contact us.
View all posts by News Staff →
Four-Lane Completed
Monsoon Arrives With A Bang