By News Staff on August 30, 2012 in Government Agencies/Utilities 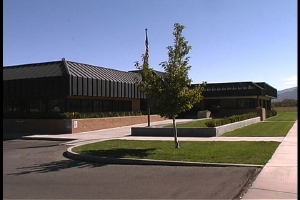 It was a day of Los Angeles Department of Water and Power rumors in the Sierra Wave newsroom. Emails, calls and visits reported that guards locked down all three Owens Valley DWP offices and took documents, that officials took documents from the Owens Dry Lake office, and that computers were taken from the Mojave DWP office. We were able to get some information on rumor number one.

A usually reliable source told us that this week guards showed up and shut down the DWP offices in Lone Pine, Independence and Bishop at the same time with guards on every gate. The story went that an email from management told workers to “give them any record they want.”

As our source reported, “They came from nowhere all at once and disappeared back to nowhere.” We placed calls to DWP Public Relations in Los Angeles with no response. A call to DWP PIO Chris Plakos in Bishop did result in a comment. To the reports of office lock down and seizure of documents, Plakos said only, “I can’t address it. This is a personnel matter.”

As for the other rumors, we have no confirmation of document seizures from the dry lake DWP office or Mojave DWP office. Other reports indicated some DWP middle-management were placed on administrative leave.

Sarah- I hope it was the FBI. Their only 90 years to late.

I once worked in an office that was into developing offshore banks in Anguilla. One day the FBI came in and seized all their files. I gather it’s a typical FBI tactic. Could it be them? That would make it a federal issue, though.

You guys up there should make some noise. What do you have to loose?

It is claimed to be a personnel matter. They needed to lock-down three offices.
Sounds like a bunch of BS.
I don’t need a BS degree to know BS when I see or hear it.

Those documents are gone, and forever.

I grew up and lived in Bishop for 18 years. My grandfather relocated from the LA area as a DWP employee. I once was told by a reliable source (not my grandfather) that one day the pervebial LA-Owens Valley water agreement would come to a perverbial head, based on the… Read more »

There is an ex-security guard from DWP that has been harassing me, accusing me of terrible thing’s and he doesn’t even know me, all because of car’s. All these things he has said, now reading about this with DWP, doesn’t surprise me. This guy isn’t wrapped to tightly and neither… Read more »

Could it be graft or fingers in the pie? Ya think

Hope we all get a refund when this all comes out. Don’t bet on it!

This is a interesting story. Hopefully we can get the facts before the public fills in the blank with our colorful imaginations.

Stealin water is a dirty business, isn’t it?

Home land security would seem like a candidate , such as the water going south is a very large terrorist target….No reliable source from this end, just a comment from the bleachers…

Skandar- are you trying to get our access to our lakes and rivers taken away? Comments like yours are not going to help.

This document seizure is most likely related to the Mammoth County Water District law suit. In this age of computer based records, discovery can include a lockdown to preclude any modification of the records in the system before copies can be obtained. I image you are trying to verify why… Read more »

I would love to know who these guards work for. If it’s headquarters, then they are here to remove evidence. If that’s the case, we’ll never hear anything about this again.

Unfortunately, you are probably correct.

way mysterious…I can see allowing whoever it was to make copies of whatever they wanted (obviously they had legal backing)….but to take documents that may never been seen again??? I can think of many things you wouldn’t want to disappear forever. Something big must be going on…somehow I doubt it’s… Read more »

Some sort of audit maybe, either internal or external. it will sift out eventually.

Guards!? Whoa!
Can’t wait to hear all the juicy details.

Which agency were the guards from?

We don’t know. Will continue to investigate.
BK

Lighten up - without the Limbaughism
Reply to  Benett Kessler

“Perhaps you should expand your life experience a tad”.

Ouch! Benett.
Just a tad touchy are we?

If I didn’t know better, I’d say you TOO have been tuning in it The Limbaugh Show and/or Fox News.

Benett Kessler
Reply to  Lighten up - without the Limbaughism

It’s not touchiness. Just a point of view.
Benett

Love your sense of humor, Benett.

Tourbillon
Reply to  Lighten up - without the Limbaughism

If you can think, think about what you just said. You characterized as “touchy” gentle advice to expand one’s experiences, disparaging such advice by implying it suffers from the sin of being a conservative position. Logically then, a good liberal would hold the opposite position, which would be to avoid… Read more »

“If you can think, think about what you just said …” And this sadly, is the form of caustic communication that has permeated our airways, is being told to our children, and trying to control every facet of our lives (because it’s “the only true American way”) It is Limbaughism… Read more »

George Orwell in his classic novel “1984,” tells us about “Newspeak.” Webster defines this to mean “Deliberately ambiguous and contradictory language used to mislead and manipulate the public used chiefly in political propaganda” Today when you hear the word LIBERAL used … just about everywhere, you can be sure it… Read more »

A “usually reliable source”….is that a new term in journalism. Just so I can process the story can you tell me Bennett, what percentage of the time is this source correct?

cat, usually reliable source is a very common term in journalism. Reporters develop sources, otherwise the public would never get to know a lot of things. Every reputable news paper and agency uses the term and uses these type of sources. Other than that, if anyone wants to know more… Read more »

I know I will sound like a smart ass but…….”usually not reliable” is a term that seems to be used throughout journalism. There is also “reliable” which is another accepted term. It is just in the thirty plus years I have been reading the news, I have never heard some… Read more »

I stand behind our story. You’re on your own to figure out the rest.
Benett Kessler

officially i am a jackass and you are correct benett, it just took me awhile to find.

you should be proud!

Cat, seriously, give it a rest. I’m probably half your age and have heard this term many times.

Check out the movie, “Nothing But The Truth” about the D.C. reporter who went to jail to protect her “source”. It’s a great movie, and true…

“Reliable sources” is what rags like The National Enquirer use all the time. Rumors. Hearsay. Trust Me.

There is one person I trust today in today’s journalism.

The Washington Post, New York Times, LA Times, ABC News – the list goes on of news outlets that use the phrase.
Perhaps you should expand your life experience a tad. Go beyond tabloids and Limbaugh. There is a big wide,
intelligent world out there.