By News Staff on June 11, 2018 in General Misc. Stories, Obituaries

Dixie Flora Smith Ralston passed away at the Palomar Medical Center in
Escondido, California on Monday, May 14, 2018 surrounded by family. 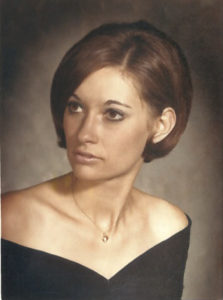 Dixie was born on January 23, 1951 in Pomona, California to Elsie Louise Owens Smith and Robert Cecil Smith. Dixie spent her formative years in the Eastern Sierra.

As a young girl she enjoyed ballet and horseback riding. Dixie attended Big Pine
High School, where she lettered in all sports she participated in, and was a
cheerleader.

As a senior in high school Dixie married Robert Earl Ralston; they were married for over 49 years.

Dixie began her working life as a waitress at Maries Diner in Big Pine, California, where Robert was the short order cook.

Dixie, Robert, and son Sam continued to build their shared life and history together in Crowley Lake, CA and Morro Bay, CA.

Later in her career, Dixie was an assistant branch manager for Security Pacific Bank
in Carlsbad, California.

Dixie invested most of her time and boundless energy in loving and caring for her immediate and extended family, as well as life-long friends.

And dear friends of the family James and Sharon McHale of Beaumont, CA.