Distracted driving is such an important safety issue that April is recognized as National Distracted Driving Awareness Month. 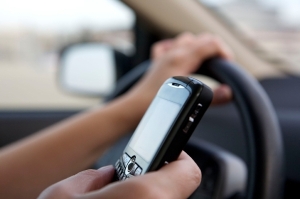 The purpose of the campaign is to raise awareness about the dangers of distracted driving in an attempt to change behavior and save lives, not just in April but also year-round. The Bishop Police Department will join statewide enforcement campaigns on April 7th and 20th, “zero tolerance days,” when all agencies will be especially vigilant for distracted drivers. Although the purpose of the campaign is not to write as many citations as possible, sometimes citations are necessary for drivers to understand the importance of focusing on their driving.

“As we rely on our cell phones more and more in our everyday lives, we seem to be kidding ourselves in thinking that they don’t affect our driving,” said OTS Director Rhonda Craft. “Crashes are up. The scientific evidence is solid. The dangers are real, and they apply to all of us. We need to silence the distractions.” The problem of distracted driving is significant, and no surprise to drivers day in and day out. The Department of Transportation notes that at any given moment, during daylight hours, more than 660,000 vehicles are being driven by someone using a hand-held cell phone.

NHTSA will conduct a television campaign in April with the message “U Drive. U Text. U Pay.” OTS will produce public service announcements and conduct a social media campaign urging drivers to “Silence the Distraction.”
WHAT IS DISTRACTED DRIVING? Distracted driving is any activity that could divert a person’s attention away from the primary task of driving. All distractions endanger driver, passenger, and bystander safety. These types of distractions include:
• Texting
• Using a cellphone or smartphone
• Eating and drinking
• Talking to passengers
• Grooming
• Reading, including maps
• Using a navigation system
• Watching a video
• Adjusting a radio, CD player, or MP3 player

But, because text messaging requires visual, manual, and cognitive attention from the driver, it is by far the most alarming distraction.

The California Office of Traffic Safety, Police, Sheriff and the CHP reminds everyone that best way to end distracted driving is to educate all Americans about the danger it poses.
“See Something, Say Something”
Emergency 9-1-1
Non-Emergency: (760) 873-5866

Operators of authorized emergency vehicles are exempt from the restrictions on handheld wireless devices. They often use handheld devices for legitimate public safety communication needs. That said, this exemption does not make them immune to the impacts of distracted driving.

I know there is an exemption in the vehicle code for them but how about a leading by example?

I like that Rusty, I once had a CHP dude tell me “Do you know how fast I had to go to catch you?

This is TOO easy, I can’t resist ! I was at the light on Main Street in Bishop in front of RUSTY’S bar, waiting for the light to change, 2nd car back. There was a Bishop PD unit making a left in the lane next to me, who was the… Read more »

I was sitting at a traffic light and noticed the cop next to me was texting. I took my foot off the brake and rolled forward a foot. He thought the light had turned green, stepped on the gas and drove through the red light. He then waiting for me… Read more »

It sure seems like our insurance companies are dictating all this public safety stuff going around!

Trouble…In this type of case,it’s a good thing,as long as someone tries to do something about it…in case you haven’t noticed,there are a LOT of idiots driving while texting and/or talking on a cell phone….

INYO How do you know if I’m responded to while I’m driving right now? Pretty soon they’ll be pulling ya over for scratching yourself. Or maybe we should all just start listing to my mother in law.

For all we know, you (“trouble” you call yoursel…) are in fact a criminal, if not and/or both a very “troubled” and miserable, lonesome individual. Something tells me/us, that you simply have nothing better to do in life, except be controversial and “stir the pot”. Perhaps this is all you… Read more »

Trouble
Reply to  No Trouble

Wow, I’m actually working 10 hour days , paying for my kids college and not trying to make things worse for other hard working people. Only traffic tickets and a little to much fun in my back ground check. Sorry to disappoint ya No Trouble.

Distracted driving is simply one component of distracted living. You see couples out all the time, in restaurants, shopping, at ballgames, each one immersed in their own little toy and neither seemingly aware of the others existence. The younger they are, the more they are tied to their electronic pacifiers.… Read more »

tourbillion…..The one I remember the most was on a June Lake camping-fishing trip I took a couple years ago…saw a family,the Mother and Father walking ahead,loaded down with fishing poles and gear,one carrying a couple of those fold-up chairs,the other with the ice chest…..and following about 25 yards behind,the two… Read more »

So, of the activities listed that are distractions, which ones are illegal? Anyone have a reference to the actual laws that apply?

We all know that texting while driving is illegal, and phone calls are to be hands free, but beyond that, I don’t know what the laws are.

There ya go, now we’re all criminals.

I actually agree with you Verne, when said like that. I just get tired of all the new laws that have impeded so many of our civil liberties in the name of public safety.

….not all of us…I’ve never had or owned a cell phone….and don’t even know what texting is or how to text…..no need or desire to keep track or in touch with anyone 24/7….land-line phone with an answering machine for me….call….leave a message….if I’m home,I’ll pick up…maybe,depending on who’s calling and… Read more »

Crazy how many people are controlled by their smart phones, they can’t put them down.
Criminals have never had it so easy to find a victim.