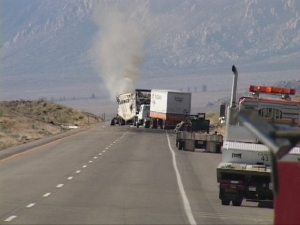 Coincidentally, a major accident in Inyo County dramatically underscored a message of this month, Distracted Driving Awareness Month.  The explosive crash of two semi trucks just south of Division Creek Rest Area may have been caused by a distracted driver.

Community reports indicated that Andrew Durham of Hesperia, driver of the semi that slammed into another truck, had diverted his attention from the highway to concentrate on something around his dashboard. When asked about these reports, California Highway Patrol Officer Dennis Cleland said, “There is substantial evidence to support distracted driving, but this is under investigation.”  Officer Cleland said the driver’s own admissions contributed to this investigation.

Earlier reports said that another semi driver had turned south out of Division Creek Rest Area and was building speed up the hill when Durham slammed into the back of his truck.  Durham’s tractor and front trailer caught fire.  Durham was reportedly trapped initially by air bags but managed to get free.

Paint and chemicals in one of the trucks spilled and caught fire. Law enforcement said some first responders who inhaled the fumes and smoke at the scene had to be treated at Northern Inyo Hospital.  Durham was transported to the hospital with some injuries.  The other driver was not hurt. Caltrans brought in a Hazmat team to clean up the hazardous spill.

Community reports indicated that he was reaching for something on his dash board? Or was it, that the CHp actually reported this through interviewing the driver? The article leads one to believe there was eye witnesses to this fact. Is that the case?
I think he just didn’t realize his speed was bringing him to overcome the slower vehicle. 65 mph versus 35 mph. I might be mistaken, but I believe this accident was before sun up? Inattentive driving probably seems better to admit to, than driving with your head somewhere else.

Big Al, We have sources in many places. Benett

LOL OK Benett. seems a lil fishy to me is all …

Big Al- do you believe reaching for something on your dash should be illegal?

What is a “community report” exactly?

It’s a source that we do not wish to disclose. BK

Distracted Driver- That would just about sum up any accident. Where do the Insurance companies come up with all this crap?

To which crap are you referring? BK

Crap like Distracted Drive Month. My point is our law makers are in bed with our insurance companies.

Not only insurance companies, but the oil companies, the energy companies, banks, health care, and major food production companies. And we all better spend our money on them so we can let the richest ones become richer.

@Jeremiah Joseph
You forget to mention Politicians and council members.

They are….it’s another ploy by government to squeeze more money out of people…laws against “distracted driving,” “reckless driving,” “cell phone use,” and “texting while driving?” These are all the same thing….”reckless driving” but the proof is in the amount of the fines….

How else do you think the heroes will pay for their Hefty Pensions.

As the pensions go up the fines need to follow

So stop complaining and pull out your check book

Distracted driving is actually a pretty well defined item in the California State Traffic Collision Manual. This is defined by the CHP and not insurance companies. The traffic collision report is the one report taken by agencies that does not vary from jurisdiction to jurisdiction (CHP 555 report) and the data input is used by both CHP, DOT, and OTS to determine ways to lower the risk to drivers in the state. This is one of the big reasons why traffic accidents are less deadly than they used to be.

Accidents are less deadly due to seat belts mostly. But now they use safety to regulate us to death.