In less than a year following its completion, the Digital 395 network continues to quietly demonstrate its extraordinary value to California’s Eastern Sierra Region. 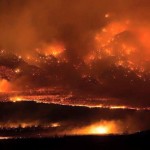 In the midst of the recent fires in Mono County, California Broadband Cooperative’s (CBC) fiber optic network worked uninterrupted to provide critical communications to First Responders and other local officials struggling to contain the fires and bring order back to the area.

While the winds and fires took down the overhead utility lines providing telephone, cellular and power services to many parts of Mono County, the CBC network continued to provide an umbrella of communications to the area. 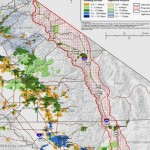 As commercial power failed, Digital 395’s UPS batteries and generators kicked into action to keep the 150 Gigabits of data flowing; and since the network was installed underground to better protect it from fire and other elements, it provided much-needed assurance to local officials and that they would remain in service.

“As long as local power was available to run their equipment, customers who were connected to the Digital 395 network enjoyed uninterrupted service”, said Nick Keeler, VP and General Manager of Inyo Networks, the company that supports CBC’s Digital 395 network operations. “We just made sure that the fuel for the generators were topped off so that we could continue to power the network for another couple of weeks if needed.”

On Sunday, after an all-night work session Inyo Networks and Verizon crews completed the emergency connection to the Verizon Mammoth Lakes central office that fully restored telephone service to the Verizon customer’s affected by the outage.

“CBC expresses its deepest sympathies to those who lost their homes or were otherwise affected by these tragedies in Mono County”, said Robert Volker Chief Executive Officer of CBC. “As the members of the community came together to combat the threat, our
team worked tirelessly throughout the weekend to craft a solution to the area’s communications outages. We are particularly proud of the role that Inyo Network’s team played in tying the area’s networks together to minimize outages. There is nothing more gratifying than seeing people work together to make things happen.”

Since its commissioning late last year, the Digital 395 network has steadily elevated the “digital landscape” of the Eastern Sierra region. In addition to over 200 schools, hospitals, and government buildings, CBC provides “backbone” internet service to local service providers like Inyo Networks, Schatnet, Suddenlink, and Lone Pine TV, whose
services were also available during the outages.

According to Mr. Keeler, Inyo Networks is engaged in an on-going effort to extend the reach of broadband throughout the area by bringing more community anchor institutions on line, encouraging Last Mile Providers to increase their bandwidth offerings, and to see broadband as an invaluable economic development resource.

By this summer, all Eastern Sierra schools will have gigabit connections to the Internetfor testing and distance learning. Hospitals in Mammoth and Ridgecrest have introduced new health care measures and procedures to take advantage of the new bandwidth.

And all three Counties (Mono/Inyo/Kern) have introduced policies or initiatives to ensure that broadband gets to all of its citizens.

Mny local residents noticed a big jump in their broadband speeds last year as CBC piped their services to the local service providers.
Funded by American Recovery and Reinvestment Act of 2009 and by the California Public Utilities Commission, the Digital 395 mission was to bring affordable broadband to rural America. Another important factor, although less prominent, was to supply
infrastructure that would improve public safety.

“I was delighted to see the network perform just as we had designed and expected that it would,” said Michael Ort, CEO of Praxis Associates, Inc., the company that designed and oversaw the construction of the network. “As the power went offline, we saw the generators come up in a blink. But ultimately the key to all of this is having the people – those that built it right and those that continue to keep it in ship-shape condition. We are very grateful that the CPUC and the Department of Commerce had the vision to make this investment. It seems to be paying off as expected.”

Speaking on behalf of the CBC Board of Directors, Ort added, “We are glad to have played our part in helping the community overcome this tragedy and look forward to more we can do to improve security and the quality of life in the Eastern Sierra.”

About Inyo Networks:
Inyo Networks, Inc. is a certificated Competitive Local Exchange Carrier (CLEC) registered with the CPUC and FCC. It provides high speed data and voice services to commercial customers in the Eastern Sierra, Southern California and Northern Nevada
region. Inyo Networks is a full service sales agent for the Digital 395 and also providesoperational support services to CBC.

NIH special meeting: ‘It’s about having a voice in patient care’
Nature – and other calls – for MLPD
15 Comments
Newest
Oldest Most Voted
Inline Feedbacks
View all comments

Roy , I was not around in the early days when the D395 project was being planned. I would like to know more about this and why a potential company was turned away. I know there are some strange things going on in Ridgecrest and I do not understand the… Read more »

Ken, Where were you when we needed you!!! We wanted to build a TV Master control facility in Ridgecrest to control facilities and feed programming, via the internet, to the eight TV stations we operate in the Western US. Initially Verizon had a great solution – they could provide low… Read more »

Eastern Sierra Local, Yes this may be true with Verizon and not willing to upgrade and tie into the Digital 395 for a Fios type fiber to the home (FTTH). With the new FCC broadband requirements maybe this will change things a bit. Also probably true about 4g service. 4g… Read more »

A competent and forward thinking local government would invest in a local ISP. The internet is just as important as every other utility. Instead of wasting money on the airport and the Tourism office, build facilities that people can use and the visitors will then have a reason to come… Read more »

The City and some other local non-profits are in process of putting in free wifi service on Main Street in Bishop; the wifi signal will be transmitted from the gazebo in the park, it should be online by Mule Days.

I like the idea of free wifi. Why not do it for the whole city? I personally think they should put drinking fountains on every corner on Main st. Everybody could see we are a friendly town and we want them to stop and walk around.

On Monday after the fires I had to go to Carson City and my cellphone (Verizon) has no service through all of Mono County. I sense that Verizon will never tap into Digital 395 and provide FIOS to residential homes in the Eastern Sierra because the money isn’t in that… Read more »

DSL worked fine during the holidays in Mammoth. At least the circuit I am on. I checked around regarding Suddenlink and I hear things were much better than Christmas time. As far as bashing that was not the intent. Suddenlink provides internet which has become a vital service for residents… Read more »

ESL….there is no coverage from North Mono Lake all the way to Minden…..cept for parts of NE Bridgeport and a spot out by the beach at Topaz Lake……When I worked for Schwan’s those were the only areas that I could make calls……or just do what my boss did in Mammoth…..switch… Read more »

Ken, If you recall the article in the sheet after the Holidays I was one of the first to jump all over Suddenlink because of the problems they had. I was also critical of that I felt they were unprepared for the increase in internet traffic we experience on a… Read more »

I also was bummed about the slow internet over the holidays, but I also feel like the papers really bashed Suddenlink hard. Where was the bashing on Von’s for long lines, or no open lanes at the bowling alley? What about the fact that I couldn’t use my families phone… Read more »

Roy, With all due respect you do not seem to understand how this broadband stuff works. I am a current Sitting Board member of the Eastern Sierra Connect Regional Broadband Consortium. (ESCRBC) Please let me explain. At the inception of the Digital 395 project, was the ability to provide redundant… Read more »

Martin: Thanks for the in depth information. I live in Mammoth and trying to talk to Verizon about the outage was next to impossible. They probably didn’t know. Voting with my pocket book is not really a good option given how much work it is to change email and other… Read more »

Yeah, yeah. Only reason Swall and Crowley have local connection is settlement bargaining. Paradise has no connection at all to be interrupted or increased in speed. Paradise fire station volunteers still put themselves on the line first. When do they get their connectin?

A bit self serving, don’t you think. The digital 395 circuits do not serve a single person or general business directly. These circuits provide internet access only to federal, state, local government and “qualified” internet service providers. In this case the Verizon “central office” and wireless transmitters in Paradise and… Read more »