By News Staff on June 19, 2011 in Government Agencies/Utilities 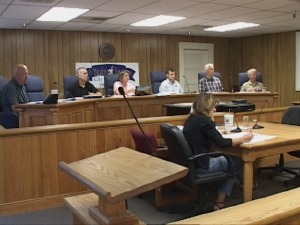 The project that will bring serious broadband internet and wireless communication capacity to Inyo, Mono and Kern counties continues on schedule with environmental permits close to done and plans to dig trenches and install cables not far off.

Michael Ort of Praxis and California Broadband updated the Eastern Sierra Council of Governments on Friday. Ort told the group that the first year of the project has focused on administration, planning and primarily environmental issues and agency permits. He said that he expects approval from both the federal and state governments on environmental documents.

The bigger news – Ort said actual buidling will start in early fall with underground conduit along Highway 395 from Kern County through Inyo and Mono Counties. “We’ll start simultaneously in many locations on the route,” he said. Ort said the schedule shows actual cabling and electronics will go into conduits in January of 2012. He said services would likely go on first in Ridgecrest but that physical connections will be made all through the area.

Ort explained that service has to start where the firm can connect into already existing service – likely on both ends of the project. On finer details, Ort said that requests for proposals will go out to vendors for cable and conduit. They will buy three million feet of cable and nine million feet of conduit and spend between $5 million and $10 million. Praxis, Ort said, has reached out in the project area to hire people. The company has also touched bases with a number of carriers, including wireless services and Suddenlink Cable. Ort said the project will be “done on time at budget or under.”

An associate of Ort’s, Cliff Beddingfield has relocated to Bishop with his family. He is an outreach coordinator and said he has contacted 250 of a potential 277 anchor institutions that will use the improved bandwidth.