By News Staff on May 13, 2015 in Entertainment/Local Events/Activities, General Misc. Stories, Public Event

Diane Stevens, an Emergency Department nurse at Northern Inyo Hospital (NIH), was named winner of the DAISY Award for Extraordinary Nurses. The recognition is part of a national program honoring nurses for clinical skills and compassionate care. 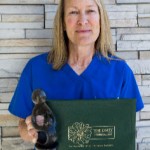 Lured into work to attend an early morning meeting, the 34-year veteran nurse walked into the main hospital lobby Wednesday and joined the assembled crowd. Overheard asking her colleagues what was going on, Stevens’ face registered pure surprise when Chief Nursing Officer Kathy Decker named her the 2015 DAISY Award winner for NIH.

“This was supposed to be a safety meeting,” Stevens laughed as she stepped forward. Stevens later said she was truly surprised to receive the award. “I don’t see myself as doing anything other nurses don’t do. I am touched to receive the honor. It was completely unexpected.”

The presentation was the kickoff to the hospital’s observation of National Nurses Week, May 6-12. “It’s a time when we pay tribute to all the nurses and the rest of the team who help support care delivery,” Decker said. “Nurses cannot do it alone. So, we recognize that it’s an effort between everybody to make a difference in our delivery process.”

Victoria Alexander-Lane, NIH’s Chief Executive Officer and a former nurse herself, called Stevens the epitome of nursing. “I really wish we could model everyone after your wonderful, generous ability to make people feel comforted and cared for,” Alexander-Lane said to Stevens. “And I want to say this: I think every nurse in this hospital is a DAISY Award winner.”

Decker said the nursing staff often receives thank you cards and letters of recognition from patients and families.  One such letter, read in part to those assembled, demonstrated Stevens’ caring approach: “I cannot thank you enough for acting on my behalf in the hospital. With your caring nursing skills and (being) the loving person you are, it is a big part of why I am alive today. I am so grateful to God for giving us people like you. I could see the care in your face that day in the hospital … You are truly an angel in the making. Thank you.”

In addition, Decker said Stevens is respected by many of her co-workers. “She’s known for being knowledgeable and caring, not only to patients and their families, but to the other staff who interact with her, “Decker said. “(Diane has) developed the respect of the physicians and all the health care team members.”

Decker said Stevens’ passion is a patient and family-centered approach which distinguishes her practice. “It’s said Diane is the nurse many people would want to take care of them if they were really sick. Diane not only knows what she is doing, but she puts her patients at ease and gives them assurance.”

Decker said DAISY recipients like Stevens are often surprised that they are receiving the honor. “To them, they don’t do anything special. That’s why at every DAISY Award presentation we ask each nurse to pause for just a minute and realize that they are also special, and how each nurse makes the world a better place just by doing their jobs,” Decker said. “Today, a nurse’s job may entail saving a patient’s life, applying training and skills to a complex medical procedure, or maybe a nurse’s act of kindness and sharing quick smile will make a family feel just a bit better.”

Stevens received a certificate of recognition; a DAISY Award pin;  a sculpture entitled “A Healer’s Touch,” which is hand-carved from serpentine stone by artists of the Shona Tribe in Zimbabwe;  and, a DAISY Award tote bag.

Previous DAISY Award nurses at NIH include Christine Hanley (2012), Joey Zappia (2013), and Deborah Earls (2014). Northern Inyo Hospital has been recognized as a DAISY organization since 2013.

DAISY is an acronym for Diseases Attacking the Immune System. The DAISY Award is part of the DAISY Foundation’s efforts to recognize the super-human efforts nurses make in direct care of patients and patient families every day. The not-for-profit DAISY Foundation, based in Glen Ellen, Calif., was established by family members in memory of J. Patrick Barnes.

Barnes died in 1999 at the age of 33 from the autoimmune disease. The care Barnes and his family received from nurses while he was ill inspired the award as a means of thanking nurses for making a profound difference in the lives of their patients and patient families.

Northern Inyo Hospital is a 25-bed, not-for-profit Critical Access Hospital located in Bishop. Accredited by The Joint Commission, NIH has been providing quality health care to the Eastern Sierra since 1946.