This press release was just issued by Mammoth Mountain and CEO Rusty Gregory: 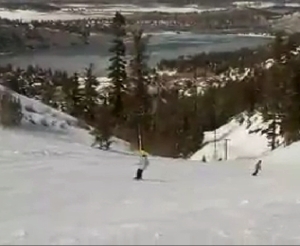 CEO Rusty Gregory said, “Cessation of operations will help the company dedicate its focus to a new future for June Mountain.”

MAMMOTH LAKES, CA – Rusty Gregory, Mammoth Mountain Ski Area Chairman and CEO, announced today the company will not operate June Mountain this summer and for the upcoming 2012-13 winter season.  “June has operated at an annual deficit each year since its purchase in 1986,” said Gregory. “It is time to invest some of this subsidy into the analysis and planning required to position the resort for a sustainable future, then secure the approvals and financing required to create it.”

Mammoth purchased June Mountain in 1986 with the idea of significantly increasing the size of the resort by building new facilities, extending new runs to the June Lake Village, and fostering additional developed ski areas along the San Joaquin Ridge, resulting in a connection between Mammoth and June Mountains.  For a number of reasons, these plans were never realized and June Mountain has, in turn, suffered from an identity crisis that has both stifled its ability to achieve its full potential and required substantial financial subsidy from Mammoth on an annual basis.  Cessation of operations will help the company dedicate its focus to a new future for June Mountain. Mammoth will be working with its partner the U.S. Forest Service to reach the best possible result in this endeavor.

In the weeks to come, Mammoth will be working to determine if and to what extent it can absorb June’s year round workforce.

Mammoth Mountain will continue to offer world-class skiing, snowboarding and summer activities for locals and visitors to the region.

Like a presidential candidate today, Gregory’s actions are the same as outsourcing. Money = Power And the weakest amongst us worship both, convinced this is “The American Way” These people will never tell you how the rich got even richer during the Great Depression on the backs of the little… Read more »

Rusty Gregory needs to be fired and held accountable for his actions. he has wanted to do this for a long time. One doesn’t just pull the rug under a entire town without notice. The financials regarding the loss of money needs to be questioned as well. I hope and… Read more »

Rusty can do what he wants within the bounderies of our laws.

Quit crying and get a life

June Mountain loses 1.5 dollars million dollars a year. Mammoth Mountain’s buisness is down and they recently laid off many long term employees. No competent business CEO would continue to pour money into a non money maker like June Mountain in times like these. Tough decisions have to be made.… Read more »

This is horrible news for the county and people in it! These people are kind, proud and hard working. I know there are innovative people out there who could think of other ways to help bring tourists in. Hopefully the people who have come for years will keep coming and… Read more »

Sorry for the run on on my last comment, I’m just passionate about theses two communities, 🙂

With money getting tighter and tighter, the modern ski crowd will be made up of the ultra-rich.
The ultra-rich want more choices: restaurants, lodging, bars, entertainment …
Come on. You really didn’t see this coming?

Econ 101, there’s some real truth to what you’re saying but the younger crowd is still showing resolve. The well off come up and buy their condo’s but the kids seem to be the one enjoying them. Development is a good thing for the most part as long as it’s… Read more »

Good post SF I am not a Rusty fan myself, but i like the positive comment about June recovering from this, and it will .. just seems sad to me that Mammoth didn’t put more effort in to June, a lot of money was spent on MMSA stuff, of course… Read more »

“If you build they will come! ” Do you know that the occupancy rate in Mammoth Lakes is less than 50% year over year and this year it has been in the low 40% to high 30%? So what we have is a town covered by empty condos and McMansions.… Read more »

The challenge for Mammoth is that it’s pretty much just a ski town! Mammoth Mountain does a great job of selling the mountain but there needs to be other activities sold like corporate events, Team Building venues and events, etc. If we worked harder on those types of activities and… Read more »

Who's the Webmaster?
Reply to  SierraFan

SierraFan – Mammoth has tremendously successful events like Bluesapalooza, RibFest, top-notch theatre, Jazz Jubilee, Motocross, Food & Wine festivals, Villagefest, Arts & Craft Festivals, Shakespeare in the woods … and much more, but for some odd reason are all overlooked on most of the websites that only promote, outdoor sports… Read more »

What about Vail Resorts? Or is this too close to home? It’s a stretch but they seem to have done a great job in the Tahoe area. The lift tickets are reasonable, they advertise like crazy, they love the ski business, etc. I know many aren’t fond of big business… Read more »

This is good news, Rusty never gave a #hit about June. Time to form a real group to buy and run the place.

The “strip and fli”p equity firm strikes again. June receives the Bain Capital treatment from Starwood. Just wait till Mammoth hemorrhages some more jobs. Make MMSA look profitable for a year, and then it’s time to sell. Consider the following from Starwood Capital website: “It is the diversity and depth… Read more »

It could quite possibly be good news…maybe a group that actually cares about a real mountain lifestyle and snow sports(Steve Klassen and Jake Burton) will increase the desire to make it shine like the genuine gem that we all know it is!…instead of some starwood capitol ceo’s( and Rusty) that… Read more »

That would be great! What about that cute little redhead snowboarder Sean White, I bet he has some $$.

The ripple effect that is going to occur because of this will be horrible. The sleepy town of June Lake will not become a ghost town.

So surprised and saddened. I know alot of people that prefer to ski June rather than Mammoth. because it is quieter, less tourists and just a nice place to ski. This is horrible news.

Laura
Reply to  just one

I am one of those that prefers june for all the same reasons! Plus the added one of the extreme inflated costs of everything in and around the area! The cost of everything is almost laughable and the distinct reason why most mono county locals do not visit the area.… Read more »

Me too! Mammoth is way too much going on. June was perfect! So Bummed out.

wayback
Reply to  just one

Think about what you just said, quieter and less tourists. Do you people really know what you want? So many move from the hustle and bustle of the city to have their little slice of quiet heaven and don’t want to share it. Now you can have all the quiet… Read more »

We’re crying for the loss of the best little mountain on earth, winter and summer. 🙁 Our hearts go out to June Lake residents, June Mountain employees and all of Mono County for this terrible loss. Hoping that MMSA can make a go of JM again in future winters. B.… Read more »

The problem is MMSA never really made a true go at it…ask Carl Williams how he feels?…no effort = no results