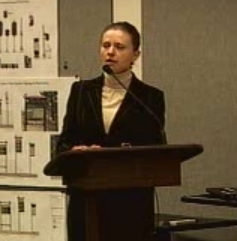 Financial consultant Marianna Marysheva-Martinez says there are three options before the Town.

Mammoth’s financial consultant has revealed more of what’s happening in matters surrounding the Town’s $42 million lawsuit debt.  Marianna Marysheva-Marinez did confirm that the Town has received a response from Mammoth Lakes Land Acquisition to Mammoth’s counter offer for settlement.  The Town Council will discuss it in a closed session November 30.

Martinez helped to clarify the process with MLLA, one that involves what she described as three basic options.  The first option amounts to settlement discussions which are currently going on. Martinez said if talks fail, the next step is mediation in front of an objective individual, possibly a hired judge, who “understands the legal process and has experience in bringing two sides together,” she said.  If all of that fails, the final step is bankruptcy for the Town.

Martinez said, “In general, to file for bankruptcy, we would have to demonstrate we tried our best to negotiate with the creditor.  We haven’t completed that phase.  Before we consider Chapter 9 bankruptcy protection,” she said, “we have to exhaust our other options.”  Martinez said the first option is to fully go through the settlement process.  “If that doesn’t work,” she said, “and we hope it does, we would go to mediation as a second option.  If that doesn’t work, we would go to bankruptcy.”

Another side of this debt situation is how to pay it. The Town of Mammoth could try to borrow money in the form of a judgment bond to pay off whatever settlement is reached, and then pay it back over time.  Martinez said this may be the Town’s only option.  “Regardless of which alternative is successful,” she said, “at the end of the process we will have to pay something, and we don’t know how much.”  Martinez said Mammoth doesn’t have any amount of money to pay to MLLA.

Martinez said most likely the only option is a judgment bond, which is a financial instrument available to governments that have to pay a lawsuit judgment. The other option is for the creditor to agree to long-term payment.

The Town is still hopeful to reach an outline of settlement by the end of the year, but there is no definite time line.  Meanwhile, 7% per year in interest continues to add up at around $200,000 per month.  The Town Council has scheduled a special closed session next Wednesday morning at 8 am in Suite Z to discuss MLLA.

Let’s not forget, we are still spending $4000.00 PER WEEK, plus housing and expenses, for MMM to “facilitate” us through this mess.

‘Martinez said, “In general, to file for bankruptcy, we would have to demonstrate we tried our best to negotiate with the creditor. We haven’t completed that phase”

tHATS RIGHT MMM
THE TOWN STILL NEEDS TO SPEND A FEW MORE MILLION TALKING ABOUT IT WITH ATTORNEYS.

“…we will have to pay something, and we don’t know how much….”

Lemme take a guess — oh I don’t know — how does 42 million dollars sound?