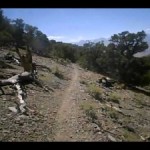 Dry weather today and tomorrow with partly cloudy skies as flat ridging takes hold. Now for Sunday and Monday, things have changed a little. The low we talked about has changed track and strengthened. So by Sunday night we go from a slight chance to a chance of showers in Mono County with snow levels lowering on Monday. The Owens Valley still looks to remain mostly on the dry side. Very windy for both counties on Sunday night into Monday, particularly for the Owens Valley.

Dennis Mattinson was an EPA Program Director and an Air Quality Specialist. He specialized in the monitoring, measurement and movement of particulate matter 2.5 and 10 microns in size (known as PM-2.5 and PM-10). He also specializes in weather forecasting of the Owens Valley and Mammoth Lakes, giving him the edge in accurate Eastern Sierra weather. Dennis was trained by the EPA and the NWS of Las Vegas to forecast meteorological parameters, to better understand PM-10 migration through-out the Owens Valley and Mono County. He began forecasting on the radio (92.5 / 96.5 FM SierraWave Media) in 2007. In 2008, TV-33 began using his local forecasts for broadcasts throughout the area. Locals and tourists from all over the world use his weather information to plan their trips, including mountain climbers and other adventurers. The movie “Iron Man” used his forecasts in their aerial filming of the mountains around the Alabama Hills.
View all posts by Dennis Mattinson →
After “draconian cuts” some good news
Dennis Mattinson’s weekend outlook
3 Comments
Newest
Oldest Most Voted
Inline Feedbacks
View all comments

thanks for the reply dennis. I get how the barometer measures the difference in atmospheric presure and how atmospheric presure is determined by the weight of the air molecules pressing down from the top of the atmosphere to the ground. What i dont get is why stormy weather produces lower… Read more »

had a question for mr. mattinson. I’ve always wondered why the barometer rises on clear days and drops on stormy days, so i did a little research and from what i can tell is clear air weighs more than stormy air which makes no sense to me because air with… Read more »

A barometer doesn’t measure the weight of the air, it measures pressure. So, typically on clear days, high pressure is the influence, thus the barometer raises. On stormy days, which typically is influenced by low pressure, the barometer falls.