By News Staff on May 1, 2013 in Government Agencies/Utilities 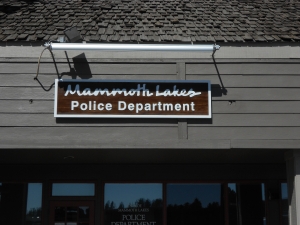 The Mammoth Lakes Police Department has called the former retail store at 568 Old Mammoth Road home since the Department’s creation in 1986.  It’s always had a sign identifying it as the “Police Department” but never which police department.

Several month ago, Dave Fultz, owner of Maverick Signs and Graphics, offered to dónate a “Mammoth Lakes Police Department” sign and install it.  The offer was readily accepted and Mr. Fultz installed the new sign on May 1.

Having been inside the police station, the term “Lipstick on a Pig” come to mind. If only those walls could talk from when it was a bath house.

good one trouble. u crack me up.

Maybe they should have used velcro to stick it up. Just is case.