There was an overflowing crowd of over 100 disappointed supporters and opponents  at yesterday’s Board of Supervisors meeting in Independence for the decision on whether or not to approve the ATV Adventure Trails of Eastern Sierra Pilot Project. The meeting had to be rescheduled and will be re-noticed for Monday, December 30. 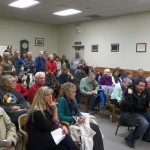 The three-year effort to allow owners of ATV’s to access local businesses and services using combined-used roads (paved and dirt) had to be postponed at the last minute due to a concern over the CA Fair Political Practices Commission’s regulatory 500-foot rule under the state’s Conflict of Interest Regulations of the Political Reform Act. That Act prohibits a public official from making, participating in making or otherwise using his or her official position to influence a governmental decision in which the official has a financial interest. 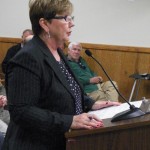 The concern was not raised until late Monday evening by a supervisor responding to a constituent’s question by contacting County Counsel. It was decided by the board to wait for the County Counsel to get a (hopefully) quick interpretation from the FPPC. Many present were unhappy with the decision postponing the meeting as well as with the alternative discussed by the supervisors to reschedule the meeting sooner than later.

A tentative date for a special meeting has been set for Monday, December 30, beginning around 3:00 pm at at venue in Independence, however the final date, time, and location will be announced well in advance by the County through a press release to local  news media and posted online at the county’s website, www.inyocounty.org.

What a great way to not have to make a decision for or against, blame it on some obscure rule that might or might not apply, out of an ‘abundance of caution’.How many times have Kevin’s employees (the board) broken contracts, “overlooked” laws and proper procedures, and generally worked on… Read more »

who are the two supes in question and what are their affilations ? reporters ?

I attended the meeting for The Sheet. Afterwards I was told the two county supervisors are Second District Jeff Griffiths and Fourth District Mark Tillemans. I am not clear on what you mean by “affiliations.” Could you clarify?

what are the businesses or financial interests

December 30th would seem to be a date that would discourage any type of public input.

Any date selected would generate this sort of response. Just because you are paranoid doesn’t mean they don’t want to discourage you from attending.

500 foot rule is a bit of a stretch here. Do they not rule on water decisions. Is there water within 500 feet. How is it they stand to gain an unfair advantage or materially profit?