By News Staff on July 4, 2012 in Government Agencies/Utilities 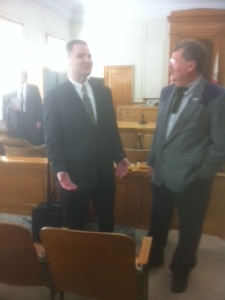 Back in court Thursday July 5th, lawyers for Deep Springs College trustees, two of whom have opposed the majority of the Board over the issue of co-education at the long all-male college.

The majority of trustees voted last September to go through a transition to admit women to the college, known for high intellectual and practical training at its remote location east of Big Pine. The Board majority petitioned Inyo County Superior Court to interpret or modify the college trust to accommodate co-education.

Two members of the board then went to court to stop this move. They allege that the founder’s trust states that Deep Springs College is for the education of “promising young men.” The majority of the trustees disagree. Chairman Dave Hitz said Deep Springs founder L.L. Nunn wanted students to train and become leaders in society. In 1917, women could rarely play that role. Now, he maintains, they do.

Before Judge Dean Stout had time to rule on the petition, the majority of the board transferred the assets of the Deep Springs Trust to Deep Springs Corporation which is operated by the same board. They then declared co-education through the corporation, free of the language in the trust.

This week, lawyers for both sides were expected to discuss discovery of evidence in the case. The attorney for the opposing board members, Joseph Liburt of Menlo Park, had also discussed the possibility of seeking an injunction since the other board members had moved quickly for co-education even before a court decision on the trust language.

On June 22, attorney for Deep Springs, Chris Campbell had asked the court, via teleconference, for a hearing on the issues as soon as possible. Liburt, who was in the courtroom, said his clients want an evidentiary hearing at the first of next year. Campbell said a delay until next year is “an excessive amount of time.” He urged Judge Stout to set a hearing soon to make a decision on the meaning of the language of the trust. More expected via teleconference in Inyo Court Thursday.

Outside of the courtroom in June, Mr. Liburt said some have accused his clients of “being neanderthals. We are not against co-education or women,” he said. “The law protects the grantor of a trust and his specific purpose.” Of the majority of the trustees, Liburt said, “They do not have the authority to do whatever they want.”

Are his clients flying in the face of social change and women’s rights? Liburt said, “We agree with equal rights. This is not a social point. It’s a legal issue. The law does not permit a decision in violation of the trust.”

We work to provide daily news to all of the Eastern Sierra, in the tradition of Eastern Sierra News Service and the Sierra Wave. We bring you daily happenings, local politics, crime, government dealings and fun stuff. Please contact us.
View all posts by News Staff →
Synthetic Marijuana in Bishop
Town Council hears harsh critics and supporters
6 Comments
Newest
Oldest Most Voted
Inline Feedbacks
View all comments

It seems as though allowing women into their would ruin what they have going. I was first shocked when I heard it was male only, but then again some of the work they have the “guys” do is pretty intensive (living with the cattle in mountains/valleys 24/7). Just doesn’t seem… Read more »

Sierragirl- that’s not a fair statement. Were there any mixed schools in 1917?

In 1917, the Deep Springs College was open only to whites. Do the two members also believe that only white’s should be admitted to Deep Springs???

Thanks for the updates on the Deep Springs legal issues in the Inyo Country court. You’re the best (and only) source I’ve found (google) for information on this topic that is of great interest to me. Keep up the good work! ( I wish I still lived out there!) Michael… Read more »

This isn’t Saudi Arabia or Iran, cut the crap, and do what is fair to all students.

I can’t help but wonder if a board can really transfer its assets into a corporation that is run by the same board? Sounds like a conflict of interest.