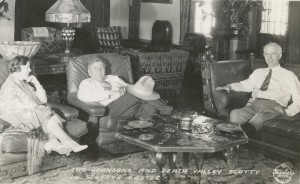 In the living room at Scotty’s Castle are businessman Albert Johnson, right, his wife, left, and Death Valley Scotty. The two men formed an unlikely and very interesting partnership that resulted in the construction of the Castle, and Scotty’s well-publicized exploits in Death Valley. Photo courtesy Eastern California Museum.

The live performance is a benefit fundraiser, with proceeds from the sale of $20 tickets going to ongoing work to restore the grounds and outbuildings at Scotty’s Castle after massive flash floods swept through the historic district last fall.

All are invited to watch and listen in to this radio drama, which features local actors, musicians and sound effects artists bringing to life the extraordinary life and times of Walter Scott, better known as the legendary, Death Valley Scotty.

Death Valley Scotty was a prospector, a performer in Buffalo Bill Cody’s Wild West Show, a raconteur, conman, husband and father. He was introduced to Death Valley when he worked as a swamper on the famous 20-mule teams that pulled huge wagons of borax out of the park.

In 1885 he met Albert Johnson, an insurance executive from Chicago who was recovering from an accident that nearly killed him. Scotty helped him to recover in Death Valley and cemented a secretive, life-long partnership which included the construction of Scotty’s Castle, an elaborate Spanish style mansion in a remote desert valley, now part of Death Valley National Park.

In 1905 Scotty beat the cross-country speed record on a train from L.A. to Chicago, which garnered headlines across the nations, Free with his stories about secret gold mines and surviving ambushes and other adventures in the extreme and exotic setting of Death Valley, Scotty also was an extravagant spender, peeling off hundred and thousand dollar bills from his impressive bankroll.

His outlandish stories and lavish spending habits quickly helped make Scotty one of the West’s most prominent, larger-than-life legends whose exploits appeared in news outlets across the country.

The Death Valley Scotty radio drama was written in 1931 and originally airing in 1955 as part of the Death Valley Days series. The Pacific Coast Borax Company sponsored the radio series, starting in 1930, and also paid the author, Ruth Woodman, to write all the radio plays.

The company used the radio drama to publicize its tourist-related holdings in Death Valley. Woodman was the lead writer for Death Valley Days for more than a decade. In 1952, she adopted many of the radio plays for the Death Valley Days television series, which was famously hosted by a Ronald Reagan.

Metabolic Studio IOU Theatre is a troupe of performers, including actors, musicians, sound effects artists, from the Owens Valley of California. The group has been performing radio plays relevant to the region since 2014 in the historic Double L bar in Lone Pine. They are taking their show on the road to support efforts to repair damage to Scotty’s Castle caused by the unprecedented flash flooding in October 2015.

The group would like to thank Rio Tinto, the successor to Pacific Coast Borax, for providing the material for this program. The live radio show will be recorded and broadcast on the internet at IOURADIO.org at a later date. For more information about Metabolic Studio, please visit http://www.metabolicstudio.org/.

The event is sponsored by the Death Valley Natural History Association (DVNHA), a non-profit organization dedicated to the preservation and interpretation of the natural and cultural resources of the Death Valley region. DVNHA has been an official partner with Death Valley National Park since 1954. 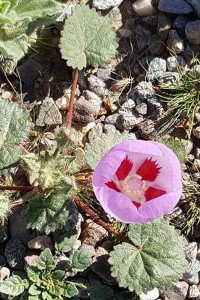 “This is the earliest I can ever remember seeing flowers in the Park,” says David Blacker, Executive Director of the Death Valley Natural History Association. The appearance of spring wildflowers depends on many factors, as explained on the National Park Service website www.nps.gov/deva/naturescience/wildflowers.htm, “Most of the showy desert wildflowers are annuals, also referred to as ephemerals because they are short-lived. Oddly enough, this limited lifespan ensures survival here. Rather than struggle to stay alive during the desert’s most extreme conditions, annual wildflowers lie dormant as seeds. When enough rain finally does fall, the seeds quickly sprout, grow, bloom and go back to seed again before the dryness and heat returns.” 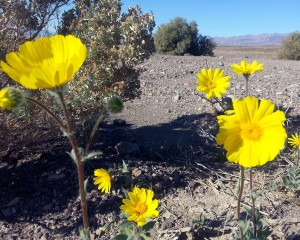 Peak viewing along the highways and at the most accessible areas of Death Valley generally occur late-February through mid-April, but wildflowers can still be seen at the highest elevations well into June and even July. This year, wildflowers are already appearing on the dunes and alluvial fans at the lowest elevations. Desert Gold, Desert Sand Verbina, and Desert Five-spot have already appeared at Ashford Mill on Badwater Road.

Just 50 miles East of Death Valley is Ash Meadows National Wildlife Refuge, another great area for wildflower viewing. The crystal-clear natural springs in Ash Meadows are home to endangered desert pupfish, and attract an abundance of wildlife from birds to big horn sheep.