DEATH VALLEY, CA – Rain this weekend was a historic event, with nearly a year’s worth of rain falling in three hours. The 1.46 inches of rain recorded at Furnace Creek is still preliminary data, and mere drops away from the all-time record of 1.47 inches. The rain caused widespread damage and closure of all park roads.

“The heavy rain that caused the devastating flooding at Death Valley was an extremely
rare, 1000-year event, says Daniel Berc, meteorologist with the National Weather
Service Las Vegas. “A 1000-year event doesn’t mean it happens once per 1000 years, rather that there is a 0.1% chance of occurring in any given year.”

Major impacts include the loss of a critical portion of the Cow Creek water system that
serves some park residences as well as park facilities including the Emergency
Operations Building and maintenance yard. Over 600 feet of the water main was blown
out by flash floods, causing catastrophic damage to this system.

Additionally, many miles of roadway are known to have moderate to severe asphalt
damage with hundreds of miles of roadways impacted by debris. Road conditions are
still being assessed, as damage makes access to some areas impossible by vehicle.
Yesterday’s aerial surveys by a Naval Weapons Station China Lake helicopter crew
were able to do a thorough search and located several vehicles in remote areas of the
park. Rangers were able to contact these visitors and ensure that everyone was ok.

California Department of Transportation expects to reopen portions of Highway 190 by
Tuesday, allowing for travel between Pahrump, NV and the park’s residential and
administrative area at Cow Creek. This will include access to the park’s visitor center at
Furnace Creek, as well as the private hotels at Furnace Creek. Park roads are expected
to remain closed for days to months depending on the severity of damage.

To date, there are no reported injuries from visitors or park residents, and people who
were previously sheltering in place have been able to carefully travel out through the
damaged roadways. No park roads are currently open to recreational travel due to
ongoing safety concerns and active road work.

“Death Valley is an incredible place of extremes,” said park superintendent Mike
Reynolds. “It is the hottest place in the world, and the driest place in North America.
This week’s 1,000 year flood is another example of this extreme environment. With
climate change models predicting more frequent and more intense storms, this is a
place where you can see climate change in action!” 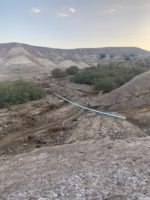