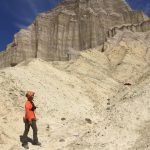 [UPDATE: 4/07/2020- Sierra Wave spoke with the Inyo County Coroner’s Office to follow-up on this story. We found out the following: The decedent was William David Namahoe, a 55-years-old single male from Modesto, Calif. with family in Tracy. He reportedly worked at Costco and was described as someone who enjoyed hiking, biking, and the outdoors.]

DEATH VALLEY, CA. April 6, 2020 – On April 4, in the afternoon, Inyo County Sheriff’s Dispatch was notified of a possible deceased person found by a hiking party of three near the base of Manly Beacon out of the Zabriskie Point trailhead, Death Valley National Park. 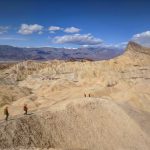 An Inyo County Sheriff’s Deputy and Death Valley Rangers responded. Rangers located the body and determined the subject was deceased. It is believed that the individual fell approximately 300 feet from Manly Beacon. Due to lack of sufficient resources and time, a recovery was not attempted that evening. 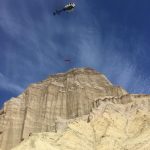 A rental vehicle was located at the trailhead; NPS Rangers reported the vehicle as being there for about three days prior to the discovery of the decedent. The identity of the recovered body is still pending positive identification by the Inyo County Coroner’s office.

Currently, Death Valley National Park is closed to all recreation other than highway through-travel. A reminder: do not participate in risky outdoor recreation at this time due to emergency medical care being prioritized by COVID-19 patients and limited rescue resources.

Dennis Mattinson’s Monday Weather
Statement from NIHD Board of Directors on Status of CEO Dr. Flanigan