A child from Southern California tragically died earlier this month after being diagnosed with an extremely rare infection known as primary amebic ningoencephalitis (PAM).

Testing was positive for evidence of Naegleria fowleri, a one-celled organism commonly known as the brain-eating ameba. 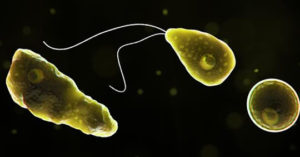 Humans become infected when water containing Naegleria fowleri enters the nose, usually while swimming or diving. People do not get infected by drinking contaminated water. In the nose, the ameba migrates to the brain along the olfactory nerve, through a bony plate in the skull called the cribiform plate, where it reaches the brain and begins to destroy brain tissue. The ameba has never been shown to have spread from one person to another.

The child’s only known water exposure during the incubation period was believed to be at one of the natural water ponds at Hot Ditch, a popular hot springs soaking area south of Bishop. Inyo County Health and Human Services and Environmental Health Departments have collaborated with the California Department of Public Health and the CDC on this investigation.

This is the second PAM case linked to untreated recreational water sources in Inyo County in recent years. In 2015, a 21-year-old succumbed to PAM after swimming in a private, untreated swimming pool in southern Inyo County.

Symptoms of PAM start quickly, usually within days of exposure, and include: headache, fever, nausea, vomiting, and stiff neck. Later symptoms include: confusion, lack of attention, loss of balance, seizures, and hallucinations. After the start of symptoms, the disease progresses rapidly and usually causes death within 3-7 days.

This microscopic ameba is from a single cell class of organisms known as protozoa. They are common, naturally occurring organisms that normally feed on bacteria and tend to live in warm bodies of fresh water.

They thrive when temperatures are high and water levels are low. PAM infections have been reported worldwide. In the US, there have been 34 cases reported in the United States during the period 2008-2017.

Almost 90% of those cases were associated with swimming in warm freshwater lakes and rivers. Other uncommon sources identified in very rare instances include:
• Geothermal water, such as hot springs/tubs
• swimming pools that are poorly maintained and/or inadequately chlorinated
• contaminated tap water
• water heaters with temperatures less than 116 degrees F
• ritual nasal cleansing or irrigation using a neti pot
• religious practices

While the ameba is widespread, infections are rare. Hundreds of millions of visits to swimming venues occur each year in the US that result in 0-8 infections per year. It is unknown why certain persons become infected with the ameba while millions of others exposed to warm recreational fresh waters, including those who were swimming with people who became infected, do not. The relative risk is extremely low, and yet the stakes are high because the chance of dying when infected is almost 100%.

How can you stay safe? As the CDC says, “The only certain way to prevent a Naegleria fowleri infection is to refrain from water-related activities in or with warm, untreated or poorly treated fresh water”.

Inyo County Health Officer, Dr. James Richardson, emphasizes that there have been no evident cases of ameba contamination in the US in well-maintained, properly treated swimming pools. Boiling water or using appropriate regular chlorination or other types of disinfectant should eliminate the risk.

Here are some tips:
• Keep your head above water in untreated hot springs or other thermally heated bodies of water and
during activities where water is forced up the nose, like water sports and diving.
• Hold your nose shut or wear nose clips when swimming in warm, untreated freshwater.
• Avoid digging in or stirring up sediment in shallow, warm freshwater areas, where the ameba may live.
• Avoid water-related activities in warm freshwater during periods of high temperature and low water
levels.
• Avoid swimming in polluted water or unchlorinated swimming pools.
• If using a neti pot for nasal cleansing or irrigation, use only filtered or boiled water.
For more information on primary amebic meningoencephalitis visit http://www.cdc.gov/parasites/naegleria

Definitely disconcerting and raises lots of questions, not to mention extremely sad for the family involved. Can the amoeba be tested for? ie. did Inyo County go out to the Keough’s/hot ditch area and sample the waters? How does the amoeba get in water sources, is it endemic to our… Read more »