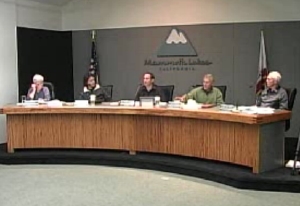 Three members of the Mammoth Town Council hit a nerve when they waived fines and penalties for a couple who rented their Mammoth home illegally and failed to pay bed tax. Members of the lodging association voiced their deep unhappiness at Wednesday night’s Council meeting.

Lodging people thanked Councilmen Matthew Lehman and Michael Raimondo for voting against the motion to waive $7,000 in fines and penalties in the Transient Occupancy Tax appeal before them in February. Teri Stehlik said the Council’s vote put two and a half years of work on TOT enforcement “in reverse.” Cheryl Witherill pointed to the extraordinary efforts of the Lodging Association members to research TOT and to help the Town create enforcement strategies. She said, “We thought the Town Council was behind these efforts. Last week was a big disappointment.” 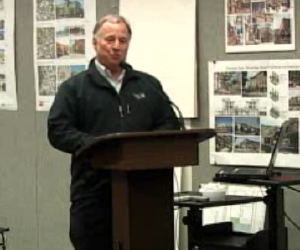 Tom Smith said of the Council waiver of fines, “To say we are disappointed and amazed is an understatement. It’s just baffling.” Chair of the Lodging Association, John Morris, said, “Many feel disillusioned and disenfranchised.” He pointed to the fact that bed tax pays for two-thirds of the Town’s operating funds.

The Council had voted that Kevin and Carolynn Cozen should pay $15,000 in TOT, but not $7,000 in fines. That was Rick Wood’s proposal. He spoke up Wednesday for the majority who excused the fines. He said the Council had clearly struck a nerve. Said Wood, “The extraordinary vitriol outnumbered all vile and vitriolic e-mails sent to me in the last 12 to 15 years.” Hit hard by the hate mail, Wood thanked those in public comment for being civil.

He pointed out that the Council acts as a judge and jury and not as a prosecutor on TOT appeals. He said the Council was bound by the evidence presented. Wood said, “The problem here was that we were effectively inexperienced in the process. There was no rebuttal evidence presented.” Wood said he didn’t like it that the couple was renting illegally, collecting TOT and not paying it. Wood said he had proposed a compromise – something between payment of taxes and fines and paying nothing. Said Wood, “We got the tax money.”

Wood also pointed out that he does not represent TOT violators as some had accused him. Said Wood, “I don’t have a secret motive.” He also said he doesn’t think the Council’s decision sets a precedent. He said they would consider appeals on a case by case basis. In the case of the Cozens, Wood said the Council “collected the tax and put an illegal renter out of business and learned about appeal hearings.”

Later in the meeting, the Council did not forgive Austria Hof’s penalty for paying TOT two days late. Joe Mueller explained the circumstances that he tried to pay taxes on December 31st, but the Town Offices and Post Office were closed. The Council stuck to the order that he should pay a $157 penalty.

Don’t lose the plot here folks, in my opinion this isn’t about the $7,000 Cozen fine. This is about an agenda to legalize the rental of single family dwellings. The drama here is nothing more of than our politicians attempting to justify the soon to be unpopular vote of legalizing… Read more »

You are not the first person to think that the whole TOT of SFR is an attempt to legalize. I have be saying that for weeks. The funny comment that I have got was that the Town staff and council are not that smart. HEE HEE Ha Ha HEEE HHHHEEEE… Read more »

You all make excellent points. And use reasonable logic to support them. But this town isn’t run buy logic and strict adherence to law. It is run by seat of the pants, knee jerk reaction to accommodate the interests of big developers or other interests that only they are aware… Read more »

Ken, You are correct. And don’t forget what has been going on in California for decades – develop-develop-develop until every square inch of land is gone. This is why so many of us have permanently left Southern California and its overcrowded craziness. It should come as no surprise that the… Read more »

That’s why I left San Diego 13 years ago. Only to find that there are powerful, rich forces trying to spread SoCal to Main St here. That’s the reason I find the Downtown Neighborhood Development Plan so offensive. They make money. We all lose the simple, quiet place to live… Read more »

One of the little guys
Reply to  Ken Warner

Whenever people take notice and want the rich and powerful to play the Share the Wealth card, you hear: “Shut up, you liberals!”
And this seems to be enough for one large group that has been totally duped by the same rich and powerful.

Maybe it’s payback, for Mammoth not sticking up for the June Lake people.

Their words - not mine
Reply to  Trouble

Ahem, I know this is certain to ruffle some feathers, but it one were to apply what one has been hearing in today’s highly volatile political arena as “gospel” for America, what comes to mind is one of their war cries: “Let them (people of June in this case) pull… Read more »

Ken Warner
Reply to  Their words - not mine

The far right’s rational is pretty easy to understand if you take a step back and squint your eyes. Basically it’s: I screwed you fair and square. Now don’t ask for any help. I got mine and I’m gonna keep it all. The ideas of “one nation indivisible” and “we… Read more »

I think you nailed it, Ken. The group you are referring to does appear to have a gigantic problem with compassion towards their fellow man. I think the extreme right personality views compassion as a weakness or something. Psychologists will tell you this is typical of persons with low self-esteem.… Read more »

This is what happens when the only qualifications any elected official has to have to wield so much power in the community – is that they received the most votes. And in Bacon’s and Raimondo’s case – ran unopposed and needed NO votes whatsoever. Behind the scenes factoid: Dave Wilbrecht… Read more »

The precedent has been set for justification for every single person who collects TOT to withhold the funds for the entire year and refuse to pay any fines.

Shame on Jo Bacon, John Eastman and Rick Wood! Their ignorance and insensitivity is unexplainable. The Cozen’s got away with it and they are still advertising on VRBO! They will keep illegally renting their house until they are fined enough to make them stop. The Town staff’s and the Lodging… Read more »

The VRBO Cozen site is now renting Monthly ,,,, nothing wrong with that!!!

How much do you want to bet they are advertising for “monthly” then someone asks if they would be willing to rent for a week, and they privately will.

Yup, I sure do. Why wouldn’t they? It’s not like our pathetic council will uphold the law anyway.

In precarious economic times, those in power-positions are going to try to pull off everything they can for personal gain. Get used to it. It’s only going to get worse. And equally problematic is the nasty and self-serving philosophy of “to hell with the little guy. Let ’em pull themselves… Read more »

Sierragrl I agree with you for the most part. They should have paid some of the fine at least one incident of zone code violation. I am with you on the tax , how can you tax the activity if it is not authorized by code? Town Attorney feels it… Read more »

I said it yesterday and I’ll say it again…how can you collect a tax on an illegal activity? Of course the Cozen’s won’t complain as it was the lesser evil for them. They should be paying a civil fine for illegally renting their house. Is there no punishment to break… Read more »

Sorry, mis-typed. I meant to say “income” not “profit”. The tax is not on the property, it’s tax on the income from the transient rental activity in which they engaged.

Councilmember Wood, and the others who voted to forgive the penalty, are missing the point. This isn’t just a TOT issue, this is a case of a clear violation of zoning laws. Those laws are intended to protect the quality of life in our town’s single family neighborhoods and are… Read more »

Seriously?? Inexperienced?? So who’s the prosecuting body? This sounds like a serious copout!! Trying to save face by doing what most attorney’s do. nuff said!