By News Staff on July 30, 2013 in General Misc. Stories, Obituaries

Dave Haas of Lone Pine recently received the Inyo Register’s “Citizen of the Year Award” just 6 weeks ago in recognition of his support and accomplishments in Lone Pine. This morning word came that he has passed away…and he will be sorely missed. 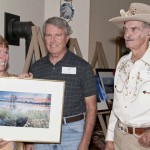 Dave Haas was a major supporter of the LP Chamber’s photography contest. Seen here with his longtime companion Lynn Bunn and competition winner Bob Rice of Bishop at the awarding of the prizes in 2011.

A former councilman and founding member of the City of Murrieta, Haas had a very successful career in construction. On losing his wife years ago, he moved to Lone Pine…and became one of its most generous philanthropists.

Haas was proud to support the Wounded Warriors Project and all the men and women in uniform serving their country. He also provided generous support to the Southern Inyo Hospital, the Lone Pine Film Museum, the Lone Pine Chamber of Commerce, and to Future Farmers of America at the local high school. He donated money to projects for town beautification projects as well such as the plants and flowers in front of the LP Film Museum at the south end of town, the Chamber of Commerce in the middle of town, and also trees alongside the highway at Spainhower Park at the north end of town.

Haas was also involved in assisting his longtime companion Lynn Bunn build the Lone Pine Skate Park for community youth and visitors. In one of his last efforts, despite poor health and in considerable pain, he bought the old Ellis Ford Motors building which had been a longtime eyesore undergoing construction on Main Street in Lone Pine for many years. He turned it into a showcase for the town and the building has been in constant use for community meetings, dinners, receptions, dances and even provides the local office for Fourth District County Supervisor Matt Kingsley.

He said many times, “I’ve had people ask me why I spend so much money…and all I have to say is that I believe that anyone who dies with a bank full of money dies a failure.” By any measure, Dave Haas was a successful­− and yes, a very rich man− upon his death.