By News Staff on April 23, 2015 in General Misc. Stories, Obituaries 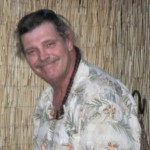 Danny was born June 16, 1957 in Yreka CA to Thelma Brumley and Bailey McRoberts. Danny spent much of his childhood with his brother Bailey McRoberts camping, fishing, and hunting. They liked to ride their motorcycles on the back roads. They would explore the old mines and hunt for old bottles.

Danny attended Bishop High school where he was on the wrestling team and won many awards. Danny had many different jobs but was more known for being a cook. In his later years Danny spent much of his time fishing, mining for silver, and exploring the desert with his dog Rosie. Danny had the ability to make everyone love him; he had many friends who loved him like family and will be greatly missed by all who knew him.