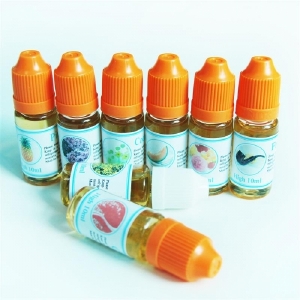 If you have children in your home, hopefully you would not! However, a new threat to the health of our children is emerging. These are e-liquids, sold legally in stores and online in small bottles that may be carelessly and casually left around the house, used for the regular re-filling of e-cigarettes.

The danger is from the nicotine content in these vials of “juice”. Children can happen upon a vial and ingest it. These fluids come in flavors and bright colors that are attractive for kids – cotton candy, cherry, chocolate, and bubble gum among others. In addition, nicotine is absorbed through the skin, presenting a risk from a broken vial.

Electronic cigarettes, called e-cigarettes, are drug delivery devices originally designed to look like regular tobacco cigarettes. Now they are larger reusable gadgets that can be refilled with liquid, generally a mixture of nicotine, flavorings, and solvents. It is estimated that roughly four million Americans use these battery powered devices. They have been hailed by proponents as a way for addicted smokers to get their nicotine fix without sucking in the thousands of carcinogens found in traditional cigarettes.

However, the evidence of their effectiveness in assisting persons in weaning off their nicotine addiction is less than stellar. In addition, evidence is rapidly mounting that they are serving as a “gateway” for young teens into the world of nicotine addiction. A recent study found nearly 1.8 million youth had tried e-cigarettes, and the number of middle and high school e-smokers doubled in one year. No wonder the industry targets the young who will be potential customers for decades to come! Their goal – to have the number of e-smokers quadruple in the next few years.

So how bad is the risk of exposure? Nicotine is a naturally occurring powerful neurotoxin, and in its potent liquid form, can be ingested or absorbed through the skin. Tiny amounts can cause vomiting, seizures, and even death. A teaspoon of even the highly diluted liquid can kill a small child.

A dose of 50 to 60 milligrams (mg) is potentially fatal for an adult; a 30 pound child could die from 1.36 mg. A vial of e-juice as commonly sold in retail stores is 17 milliliters, and with a 2.4% concentration would have 408 mg of nicotine. This year it is estimated that 1 to 2 million LITERS of liquid will be sold, much of it on the Internet. A liter of 10% concentration costs about $110, a gallon $195, and one company even offers a 55 gallon drum!

Nationwide, reports of accidental poisonings linked to e-liquids in 2013 jumped 300% from 2012, and is on pace to double again this year. Most cases are under the age of 4. A shop owner says that “We tell them that this stuff is poisonous. We do everything we can to protect the consumers, but at the end of the day, you leave a loaded gun on the floor, and your child gets hold of it, it’s not gonna be the gunmaker’s responsibility.” A CEO of e-cigarette franchises says ‘It’s the wild, wild west right now.” There is no FDA regulation so far. So at the moment, if you are a user, your child has to go no farther than your own home to find a lethal dose of poison. Be aware of the risks, and keep vials out of reach. You are responsible for the safety of your children.

We work to provide daily news to all of the Eastern Sierra, in the tradition of Eastern Sierra News Service and the Sierra Wave. We bring you daily happenings, local politics, crime, government dealings and fun stuff. Please contact us.
View all posts by News Staff →
ICARE funds push new animal shelter ahead
Mammoth Hospital responds to low snow year