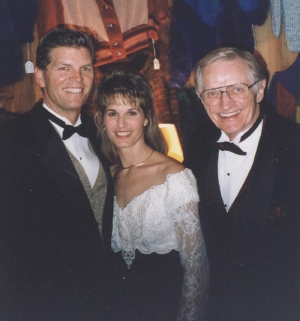 A lonely man with a big heart and the power to give. Dan Haydon made Mammoth Lakes his home, his family and his arena to make people smile. Haydon died February 26th in Quincy, Illinois. He was 82.

He started out as a dishwasher at the Mogul Steak House. Tom Hansen had built the Mogul. Back then it was a cook-your-own steaks kind of restaurant. Before long, Dan advanced from dishwasher to owner of the Mogul. Carey Sigmen joined Haydon and the Mogul in 1983. Carey said Dan diversified the menu and ran the restaurant for 27 years. Carey bought the Mogul from Dan in 1998 when he retired.

Carey said Dan had stick-to-itiveness. “Dan saw an opportunity and he stuck with it. He borrowed money from everyone he knew and made it a success.” Haydon is described as a kind of loner who had no family of his own. “But he was a giver,” said Carey. “This is a man who had no family of his own. He took the Mammoth community on as his family. He gave in so many ways.”

Haydon did give of his time, energy and money to the fire department, the college, the Lions Club and the Historical Society which he helped to found. Sigmen explained that when Dan’s mother died “she left him an inheritance. Instead of keeping it for himself, Dan gave all of that money to the college.” Haydon was instrumental in creation of the Diamond Partner Program of donation to Cerro Coso College. “Dan was not that wealthy,” said Sigmen, “but he gave everything.”

During the frightening Rainbow Fire that threatened Mammoth in the early 90s, Dan opened up the Mogul to all of the firemen and fed them steaks. In the 80s, when drought hit and spirits sagged in Mammoth, Haydon organized a snowdance and the burning of the skis in a bonfire at the Mogul. He was a jokester and put on the Skinny Legs Contest in the 70s, with his own legs as the skinny standard. If times were down, Haydon was up.

Dan was born August 29, 1928 in Palmyra, Missouri. He served in the U.S. Army in the Korean War. Haydon was a teacher at LA City College and in Okinawa and France. He later settled in Mammoth Lakes, was an avid skier and businessman. In 2008, Dan moved to assisted living in Quincy, Illinois where family live. He is survived by his brother Jack, many nieces and nephews and dog Ruby. His several pet dogs were his constant companions.

Contributions in Dan Haydon’s name may be sent to the Mammoth Foundation, Edison Hall, 100 College Parkway, Mammoth Lakes. A Celebration of Dan’s life will be held Sunday, March 20th at 1pm in the lobby of Cerro Coso College in Mammoth.

We work to provide daily news to all of the Eastern Sierra, in the tradition of Eastern Sierra News Service and the Sierra Wave. We bring you daily happenings, local politics, crime, government dealings and fun stuff. Please contact us.
View all posts by News Staff →
Great mixes: Rusty and Daisy
Mono DA has still not filed charges against Crosby